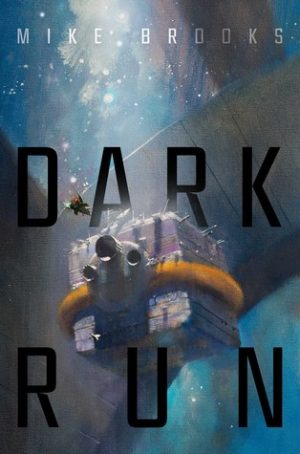 
Today’s review is of Dark Run by Mike Brooks, a fun science fiction novel I initially picked up at the library. It’s a quick book, one that’s fast paced and fun, which I finished in only a couple of sittings.

Dark Run is a science fiction novel about Captain Ichabod Drift and his crew aboard the Keiko. Drift is given an offer he can’t refuse, not if he wants to walk out alive. It’ll be difficult, but doable. Just pick up the goods and drop them off on Earth. And then he can leave his past behind him where it belongs. But of course, things aren’t that easy, and the past has a way of never quite staying buried.

This science fiction novel is a fun romp through space. The story is told in third person, mostly from Drift’s point of view but switching to a few other characters as well. It opens with a bang, showing off the books strengths. The book moves along at a pretty steady pace the whole way through. One or two sections felt as if they moved a little slowly, but at no point did it feel like the plot dragged.

The story is a gritty story, one filled with smugglers, corrupt politicians, mercenaries, and their ilk. The majority of the characters move in shades of gray. For the most part, they are not wholesome or terribly admirable people from a moralistic standpoint. Many of them have pasts they’d rather not speak about hence one of, if not the, most important rule aboard the Keiko. No one will ever ask about your past. You don’t have to tell anyone. This is a fresh start, and as long as you can pull your weight, there no questions are asked. This is something that’s very important to more than one member of the crew. Some of them are running. Others want a fresh start. But all of them respect that rule.

I’ve seen this idea mentioned in other books, but the effects of it are felt the most in Dark Run. The theme is used to its fullest ability here. This is something important to them on a very personal level. Though some of the characters aboard the ship have worked together for nearly a decade, their backgrounds are hazy at best. Events in the story test the bonds they have and force the characters to question how well they know and trust one another. This brings up some interesting questions about people and how well you know them. Does a person’s pasts matter all that much? Is it a betrayal if important life events area never brought up? Do events prior to meeting someone change your perception, trust, or caring for another once they are discovered?

This is, in my opinion, probably the novel’s strongest point. The characters are all very interesting people, with varied backgrounds and wildly differing personalities. Some of them fall into known archetypes, but they are bursting with personality. All are rather memorable, with their own quirks, their own close friends aboard the ship, and plenty of back and forth banter. To be honest, the only character I didn’t always like was the main character, Ichabod Drift. There was nothing about him I particularly disliked, but at the same time he was a bit more archetypal and predictable than some of his crew.

While the novel isn’t necessarily ground breaking in any ways, it knows what it is and does it well. This is a space western, perhaps a bit formulaic in plot and characters. In this case I don’t think this works against the novel. Perhaps we can tell the general direction the plot is going, but it’s still fun getting there. The characters have a lot of personality and, whether you like them or hate them, it is they who carry this story.

In all, this was a fun tale. Dark Run by Mike Brooks was an enjoyable read. Perhaps not the most original book I’ve read all year, but fun nonetheless. Will I pick up the next book in the series? Yeah, probably. If you like science fiction, especially space westerns, then this might be a book to check out. If you don’t like space westerns this may not be the book you’re looking for.