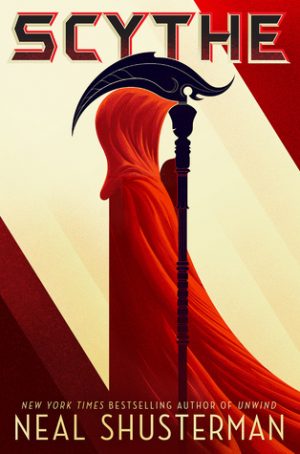 
Here’s a book that I’ve had on my shelf for some time. Now that I think about it, I’ve had this almost since its release date way back in November of 2016. Ah, the bane of the to-read shelf, or shelves, as the case may be. (Yeah, I know. I’m not proud of my book binge buying and not reading habits). Scythe by Neal Shusterman is a young adult dystopian novel about two apprentice scythes, people who ‘glean’ (see: murder) others as a means of population control in a futuristic, utopic world.

Here’s what the book is about.

This story is about Citra and Rowan, two teenagers who become apprentices to a Scythe. The world they live in is a veritable utopia. There is no more disease or death. Government has been replaced by a conscious, benevolent AI system, meaning no more war. The only way a person can die is if they are ‘gleaned’ by a scythe, a prestigious position to be sure, but one feared and generally unliked. Citra and Rowan find themselves apprenticed to one of these scythes, bound to stay in training for a year. Neither want to stay – it wasn’t in either’s plans – but failing has dire consequences.

I really loved this story. While staying distinctly within the young adult genre, it feels more dystopic than some other YA dystopias I’ve read. It’s very original, not derivative of the plethora of other YA dystopias which have come before.

Now, the story takes place over the course of about a year, quite a long time. There are time skips between one chapter and the next, but it never felt jarring in any way. It was well paced overall, and held my attention throughout. Now, that isn’t to say that there are thrills a minute. This isn’t necessarily a high octane thriller, so keep that in mind if you normally don’t read in this genre.

Our main characters are Citra and Rowan, two high schoolers who catch the eye of Scythe Faraday, a well-known scythe looking for an apprentice. The two are quite different personality wise. Citra strives to be the best in everything she does. Rowan, the middle child of a household of nineteen, is used to being overlooked and has no real need or desire to stand out in a crowd.

There is a little romance in the story, and it’s not very hard to guess who the romantic interests are. If you are a fan of dystopias but aren’t a big fan of romance as a main plot device, don’t worry. While present, it isn’t a main plot by any means and doesn’t detract or distract from the main story.

At first glance the world this story is set in looks like a veritable utopia. And, in a lot of ways it is. War is a thing of the past. There is no more hunger. Disease, and even death, have been conquered. Everyone is educated. Everyone has jobs. And anyone can look as young, or old as they want. This, however, is not the case.

The dystopic elements of the story are small, and more subtle than many other novels touching upon similar themes. The phenomenon of being nearly immortal is relatively new. It’s only been a few hundred years since this technology was developed, and the long term effects on society and the earth as a whole are unknown. Despite having much added time on their hands, the human race doesn’t seem to have done too much in terms of major inventions since then, and have, in fact, given up in certain areas. A series of disasters led to the abandonment of space programs such as colonization of Mars. Even the arts seems to have a certain level of abandonment. Immortal humans seem to have a very real disconnect from those who lived mortal lives. Much of the art, literature, and music we know today doesn’t connect with them, as they have no concept of things like fearing the death of a loved one, fighting for your beliefs in war, etc.

This is a very interesting, but subtle twist. Not only are Citra and Rowan in a position they don’t want to be in – both are horrified at the prospect of being scythes – but they don’t have much of a reference for it. Death is unknown to them. They’ve never really seen it before. They have little framework for what it really means. But so too do the scythes themselves as demonstrated by vastly differing outlooks on what it means to be a scythe and how they should go about their task.

I must admit that characters and themes tend to fall a bit more into the good vs. evil as opposed to shades of gray. Part of this, I feel, is that there is a such a disconnect from our current, mortal world, and the future immortal one. I don’t think this detracts from the story, but it is something to keep in mind if you don’t like more straightforward themes and concepts while reading.

I really can’t recommend Scythe by Neal Shusterman enough. It was a fun read, had a few good twists, and I highly recommend reading it. When the next book in the series, Thunderhead, comes out I will most definitely be reading it. If you like dystopian stories, young adult books, or Neal Shusterman’s other works, read this book. If you don’t enjoy dystopian tales, or enjoy more characters with a grayer moral spectrum this one may not be for you.