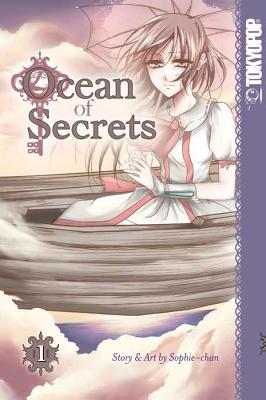 Ocean of Secrets Volume 1
By: Sophie-chan
Release Date: May 16, 2017
Publisher: TokyoPop
Series: Ocean of Secrets #1
Received From: Publisher
(All reviews are our own, honest opinions.)
Rating:


It’s no secret that I love manga. So when I had the opportunity to review a copy of a new manga I’d never heard of before, of course I jumped on it. Ocean of Secrets, Volume 1 is a brand new series by the mangaka Sophie-chan. The cover was full of pretty purples, and drew my eye to it immediately. This volume will be released on May 16, 2017, just a little over a week from now.

Ocean of Secrets Volume 1 is about Lia, an orphaned seventeen year old living near the Atlantic coastline. One day while out boating with her adoptive sister Lia is swept away at sea, only to be rescued by two strangers. Albert and Moria take her in aboard their magical ship, and Lia is plunged into a world in the clouds, a world very different from her own.

For the most part, the writing itself was good. There were a few times the phrasing felt just a tad bit awkward, but nothing that stood out too much. I also liked the art. Some panels do have quite a bit of white space, leaving backgrounds up to the imagination entirely on some pages.

The thing I liked the most about this manga was probably the first chapter. It was well paced, and I was drawn to Lia and her sister rather quickly. The art was pretty. I was definitely drawn in and wanted to keep reading.

However, the rest manga moves fast. Very fast. A bit too fast, really. There were a few times that it felt like a few pages were missing, events occurring so quickly that it felt almost wrong. There was a lot of telling rather than showing. I would have liked to see a bit more Lia’s reaction to events rather. The second chapter included quite a bit of infodumping.

On the other hand, it’s quite nice to have one volume be such a complete story arc. This isn’t something we always see in manga and it can be a good thing to pick up a manga volume and get a very complete story without needing to dedicate yourself to the next three or four volumes as well, if not the entire series. Still, I couldn’t help but wish that a few scenes were extended by just a couple of pages. I think we could have used a little more time with a few of the characters to really get in their heads a little more and identify with them, or at least sympathize for them, a little better.

The end of the book has some great bonuses. There are alternate character designs of the main characters. And, most interestingly, there are alternate versions of some of the pages. It’s fascinating seeing the earlier versions and alternative layouts, and despite many manga having small bonus things at the end of the volume, I don’t think I’ve ever seen this before.

Despite pacing issues, I am interested to see where the story is going, especially since what I assumed to be the main plot of the entire series resolved itself in one volume. What direction is the manga going in? I can make guesses, but I’m not positive. If you like fantasy manga give this one a try. If you don’t like fantasy manga, or don’t like infodumps then this may not be the manga for you.