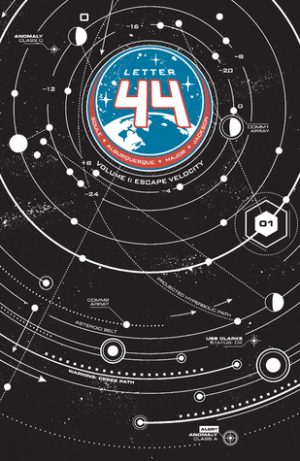 
I often find myself reading manga. It’s a genre I love. Truth be told, I should read more graphic novels and comics than I currently do. I’ve had Letter 44, Vol. 1: Escape Velocity by Charles Soule on my radar for quite some time and, finally, I picked it up. This is a graphic novel promising political intrigue and alien encounters deep in the asteroid belt. With action both on and off planet this is graphic novel sure to please fans of both thriller-esque political intrigue and fans of standard sci-fi.

The graphic novel opens with the 44th president of the United States, Stephen Blades, on inauguration day. A letter has been left for him by the outgoing president outlining things that seem almost unbelievable. Within the asteroid belt an alien structure has been identified. A team of scientist and some military personnel have been sent to investigate. The American people know nothing of this, and most of the administration is in the dark as well. It’s up to the new president to keep things under wraps to prevent widespread panic as the astronauts confront the great unknown.

The story follows the two groups. On earth we follow the new president. In space we follow a crew of nine individuals seeking answers to who or what is sharing space in our solar system. Transitions between these two groups are rather well placed. At no point did it feel particularly jarring, or odd.

The astronauts are an interesting bunch. These are brave individuals who are, more or less, trapped in space. The technology used to get them there, while more advanced than what we have today, is by no means flawless. A fair amount of their time seems to be dedicated to repairing a failing ship without enough fuel to get them back to Earth. The captain is pregnant with, well, one of two characters child. The ship’s inhabitants have come to accept polyamorous relationships as the norm, which was both understandable and a bit different than what I usually see.

I do have to question some of the more major happenings later in the volume, though. For a bunch of scientists I had to question some of the character’s thought processes. One scientist in particular seemed to just blunder his way through a chapter for no real apparent reason. Maybe because the plot required it? To raise emotional stakes? Honestly, I’m not sure.
Back on Earth, the scenario is very different. The new president is rightly intrigued by this knew scientific discovery, and politics in Washington grow volatile as the small group who knows about the space mission vie for power. While the intrigue was fun, I did have some problems with these set of characters initially.

The 44th and 43rd presidents are obviously based on our actual 44th and 43rd presidents. Not only this, but the economic, international, and political issues surrounding both presidents which were mentioned were all real life events with names and dates removed. This alone isn’t a problem. There are many interesting ways this could be played subtlety into the narrative, giving social or political commentary or perhaps used as satire. Instead, it felt boring, a cheap way to set up the story, make sure everyone understood it, and get to the meatier bits later.

The graphics were nice. The background were well detailed, a welcome departure from the completely background-less shojo manga I’ve been reading lately. I never found the layout of the incoherent; speech bubbles were easy to follow and never in awkward places.

I’m not positive if I will continue this one. While the idea shows promise and the sections focusing on the scientist held my attention, overall, the story fell just a little flat. It wasn’t quite as compelling a read as it really could have been, and I found myself putting the volume down multiple times, mostly when the narrative returned to what was happening on earth.

Perhaps it’s just not really for me. If you enjoy political intrigue, like science fiction set close to modern times, or like graphic novels, check out Letter 44, Vol. 1: Escape Velocity by Charles Soule. If you don’t like graphic novels or aren’t a fan of politics in books this may be a book to skip.