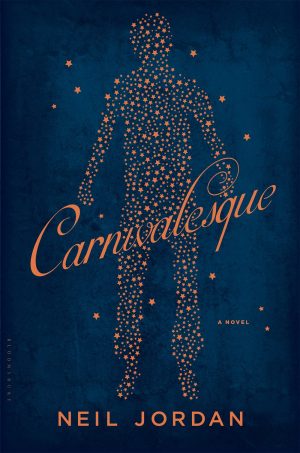 
Carnivalesque by Neil Jordan is a story about a boy named Andy who finds himself sucked through a mirror in a carnival’s house of mirrors. His reflection enters the real world and goes home with his parents, leaving Andy stuck and alone on the other side of the glass. He is not alone here, for this is the world of the Carnies, the carnival people, a place where magic is real. Meanwhile Andy’s mother watches the Not-Andy living with her family, wondering if this is merely Andy growing up or if this is something else, something more sinister.

The prose had me captivated and wanting to read more from the first page. The language used is beautiful and enchanting, perfect for depicting a world that overlaps our own, a place filled with magic and people who aren’t quite normal. I was also quickly invested in Andy’s family, namely in Andy and his mother, two characters that are both interesting in their own right.

Andy is not quite a child but not exactly a teenager, either. He knows something has changed within his family, but doesn’t know what. The air of sadness is palpable, but something he can’t quite get to the bottom of and doesn’t seem to wholly understand. The house of mirrors is a surprisingly frightening place. After being sucked into the mirror, he finds himself in a place very similar to our own world, yet quite different. When he speaks words seem to come out backwards, forcing him to be more careful with his words. In this place he has a new name, Dany, partially due to the difficulty of speaking and hearing the words correctly.

This metaphor might be a touch heavy handed, but the scene remains quite atmospheric and surreal. The mirror world is very different from our own. The place itself was frightening. The new characters introduced were quirky, odd, and had more going on with them than perhaps met the eye. It was Eleanor I found most interesting, however. We see a perspective not often seen in portal fantasies here – that of the parents left behind. What do the parents think? Do they notice that the boy who looks like Andy isn’t really him? What happens in the world left behind? These are all questions that are answered here. Eleanor’s struggle is real. There is an air of mystery here, Eleanor having the nagging feeling that something isn’t right with her son, but not knowing what.

As a whole, the first third or so of the novel stands tall and proud. It was intriguing. It flowed from place to place and character to character with easy. The next third of the novel follows a different pattern. The majority of the second third is dedicated to world building and the backstories of characters not heavily involved in the plot. The pacing slowed here compared to the first part. We learn about the carnies, this new family of carnival workers that has taken Andy in. I never found myself very invested in any of the carnies, despite each of them having objectively interesting pasts. They were secondary characters at best, in no way the main characters of the novel. All forward momentum of the story was stopped in exchange for what is, essentially, an info-dump. Yes, very pertinent information was conveyed, but it was Any and Eleanor who I remained invested in.

Much reference is made to a former boy who fell through a mirror and the books and notes he kept on the carnies and their history. It seems a bit obvious to say that if all of this were related in more direct manner it may have been more interesting and felt less like a deviation from the plot. Passages from this book could have been used. At the very least past events could have been relayed through Andy instead of nearly writing him out for a chapter on end.

These chapters wind their way back around to the plot first introduced at the beginning of the novel. The mystical yet spooky air of the novel changes. Real world events take a clear turn towards the horror genre, which may surprise some readers. Not-Andy proves just as strange, terrible, and frightening as Eleanor feared. A slow, meandering plot suddenly has a single focus. While a fun, edge of your seat battle concludes the novel, it proved to be ultimately unmemorable. I was not necessarily invested in the reasoning behind this attack on the carnies and ensuing fight, largely because I never felt very connected or invested in the carnies and their past.

What I was invested in was Eleanor. The ending of her plot was something I was both invested in and greatly enjoyed. I found myself sympathizing with her more so than many of the other characters, and it was this ending that I enjoyed the most. She is a very interesting character who provided a point of view not often seen in many novels within the genre.

While hitting on some very deep topics, Carnivalesque wasn’t quite the home run I thought it would be. The plot meandered towards the middle of the book, there was too much backstory and info dumping, and side characters were thrust into the spotlight instead of the two main characters. Regardless, I still enjoyed the book, and do recommend it to anyone who is looking for a very different twist on portal fantasy. The author’s prose was also quite beautiful, and I certainly want to read more of his work.