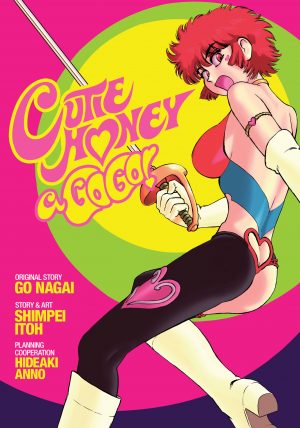 As the pages at the conclusion of the manga state, Cutie Honey a Go Go! is based off of the live action Cutie Honey movie released several years ago. However, the original print run of the manga was cancelled. This manga is only one volume, one large volume, but a volume that is incomplete as the original serialization was canceled prior to the story’s conclusion. This means that the manga ends quite prematurely, leaving the plot open ended and the story unfinished.

This manga has a bit of a more serious tone than other incarnations of Cutie Honey. Everything is told from Natsuko’s point of view. The police have no leads on why Panther Claw keeps attacking the city. These events seem to occur at random, with Panther Claw’s motives obscured. Every person assigned to the case has the bad habit of being killed or disappearing within twenty four hours, but Natsuko takes on the task anyway, determined to get to the bottom of things once and for all. Natsuko is determined to get the bottom of these occurrences.

Aki Natsuko can be a lot to handle, at least in certain of versions of Cutie Honey. The over the top characters and wild antics are usually a draw to the story for me. While Natsuko was very determined and driven to find out Panther Claws motives, Cutie Honey’s relationship to them, and what Seiji Hayami’s motives were, she also felt overly stubborn and obtuse, refusing to see some of the more obvious character traits in those around her. This strayed from character flaw into simply annoying. The delightfully quirky, bizarre, and over the top feel is muted in this version of the story. Large sections feel much more like a regular cop drama. In one sense this heightens the bizarre feeling – regular police treating super-villains as totally normal in a world that appears otherwise completely like our own is very amusing. It stands out very starkly, completely breaking form with nearly every special powered, super villain or hero filled story we’ve ever read. However, this stark contrast might not be for everyone.

Certain sections are bloated with exposition. The manga flips between the exciting action scenes we’d expect to a quieter moments as the police try to parse through the information they have and discover Panther Claw’s motives. This slowed down both pacing and plot in certain places, going straight from fun battle scenes to a long discussion in a police station. The entertaining story of an android with wild powers feels distinctly at odds with the straight shooting detective movie feel of large sections of the manga. However, this is, in part, what makes it fun. Having characters with wild, unknown powers fighting so constantly followed by regular humans treating this as perfectly normal behavior and trying to apprehend them as if they were normal criminals is very entertaining.

I did enjoy having Dr. Kisaragi in the story more than in other versions. Certain changes were interesting, and I honestly wanted to see where the plot was going to go. But the story remains unfinished. Sister Jill was never given much screen time. Cutie Honey’s coming to terms with her human aspects and mechanical aspects was never fully explored. The exact motives of certain characters weren’t ever revealed. For those that want more closure, there is always the movie to bring the story to a more fuller conclusion.

Overall, if you aren’t already a fan of Cutie Honey you probably won’t enjoy Cutie Honey a Go Go! very much. Certain sections might be confusing to those completely unfamiliar with the series. However, if you are a fan this might be something that you want to add to your collection. Those who enjoyed the live action Cutie Honey movie which this manga is based off of might also want to pick up a copy.