Review – The Arrival of Missives by Aliya Whiteley 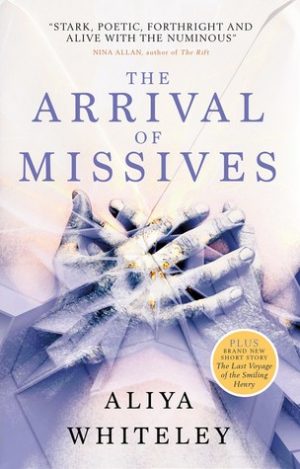 
Aliya Whiteley’s The Arrival of Missives is a historical fantasy novella that is absolutely not to be missed. The prose has lyrical beauty that sweeps the reader along and weaves a truly unforgettable story.

The tale begins in a small village at the end of World War I. Shirley is nineteen, at the end of her schooling, and dreams of more than the preset plan expected of her. She isn’t interested in marrying a boy from town who will take over her father’s farm one day. Shirley has her eye on going to college, becoming a teacher, and marrying her 24-year-odl schoolmaster Mr. Tiller. But Mr. Tiller was grievously wounded in the war in an accident he shouldn’t have walked away from, and brings with him something that’s either prophecy or warning. Either way, it’s interfering with Shirley’s plans.

The story is told in first person from Shirley’s point of view in utterly beautiful, lyrical prose. It is the sort of writing that sweeps the reader away, written in a voice appropriate for the time period. Shirley’s heart and soul are poured into this firsthand account, something felt from the very first page.

It is easy to feel Shirley’s longing for more. The village feels cloistered from the rest of the world. It’s small, almost claustrophobic feeling. Shirley is quite bright as well, with a vast well of untapped potential. The push and pull of her following her own desires versus doing what is expected of her and what is appropriate for the time period were very believable. She is a fantastic character and one whose point of view I truly enjoyed reading from.

Things aren’t all quite as they seem in this sleepy village. How, exactly, I will remain silent on; I don’t want to spoil the mystery. Needless to say, things do not go quite as Shirley has planned. Her resourcefulness, nerve, loyalties, and inner strength are put to the test.

Various characters weave in and out of the pages – Shirley’s schoolmates, the boy everyone expects her to settle down with, her parents, and her teacher. These characters all feel very alive. They are fully formed, their motivations and personalities very real and believable.

The effects of war are felt her, most notably through the character of Mr. Tiller. Though the war is over it’s echoes are still felt in very real ways. This is blending with the fantastical and science fictional in some fascinating ways. As I stated before, I don’t want to get too involved here as it is the main conflict of the story. Going in blind is truly best here. But don’t worry, though the book may feel like a historical fiction novel upon the opening pages, it certainly broadens in genre and scope as the story goes on.

I would highly recommend picking up a copy of The Arrival of Missives by Aliya Whiteley. It is a wonderful blend of speculative fiction and historical fiction. This is not a story you want to miss.