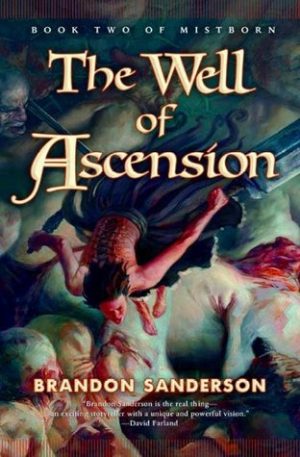 
Returning to the world of Vin, Elend and the rest of Kelsier’s crew was enjoyable and it kept me hooked on this series. The action is still there, the characters are still well written and the story only gets more complicated from here on out.

Let’s first look at the things done well in this book before I discuss a few plot points and thus expose some spoilers. The characters are still will written, the different points of view are fluid and consistent to the previous book, the plot is always pushing forward and, if nothing else, characters you both loved and hated in the first novel are back to give you more ammo on your emotions towards them. If you’ve read the first book you’ll probably already be reading this second book. If you haven’t read the first book…go back and do that.

The story picks up a year after the previous book left off. A lot has changed in a year. The revolution has taken hold and from here on out there are SPOILERS.

With Kelsier gone (rest in peace) the crew is struggling to keep the Final Empire running. And when I say struggling I mean it. There are opposing forces on all sides and issues internally only exacerbate the problem, making Elend’s rule over the land more difficult than anyone could have expected it to be. After Vin kills the Lord Ruler in the first novel the land is without their symbol of government or their religion as the Steel Ministry has also disappeared. The capital city is in turmoil and with three armies converging on the city no one is sure how long they, or the empire, will survive.

Revelations from the previous book surrounding the Lord Ruler, his powers and Vin’s own developing powers continues to bring change and strife to the crew of characters left trying to hold things together. I don’t want to give too many spoilers but let’s just say there is a Kandra amongst the crew and it’s not who you think it is.

New characters such as Tindwyl add a level of excitement and curiosity to the pages as the new dynamic shifts how the main characters proceed in their day to day life. Another thing that challenges everyone? Assassination attempts, ya know, if running a crumbling empire wasn’t hard enough for Elend and Vin.

If you’re looking for a fantasy series with a lot of fans to back it up look no further. This book has an average 4.35 rating on Goodreads and a plethora of reviewers that, if I don’t do enough to get you interested, maybe they will. If you’ve read book one and are wondering if you should continue on, you should.