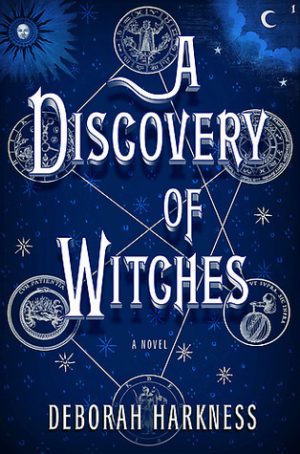 Deep in the stacks of Oxford’s Bodleian Library Diana Bishop, a descendant of witches, accidentally calls a manuscript to her, the magic responding to her own but it is this act that serves as a catalyst for the rest of the book. Diana has stumbled upon a coveted treasure lost for centuries. And she’s also discovered that she hasn’t buried her magic as deeply as she thought she had.

Diana meets Matthew Clairmont but he isn’t some genius geneticist as many believe. Well, he is, but he is also a vampire. In Harkness’ world the two species are not meant to mix so, of course, the inevitable happens. They fall in love. And while this trope bothers me as it is so constant in the world I did look beyond it to the rest of the story because I was drawn in by the characters (both main and side characters) as well as trying to understand the motives and the world better. Call me a sucker if you want, at least I enjoyed another book.

I’ll admit that parts of this felt a bit too much like Twilight while other parts felt like they were trying to have the Anne Rice feel. However, Harkness did a great job in creating an interesting plot and a great cast of characters and I can’t fault her effort. I also did enjoy all the alchemical, historical and mythological references made throughout this which leads me to believe Harkness went on a deep dive to give us this story. So I respect her dedication on that front as well.

Another note to add: a show was made of this book and it can be found on Amazon Prime as well as AMC and Sundance network.