#MangaMonday Review – Wave, Listen to Me! by Hiroaki Samura 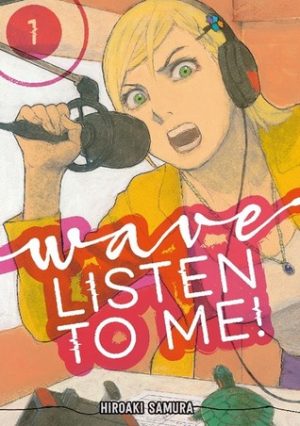 
If you have been enjoying anime’s Spring 2020 season, you might be interested in the first volume of manga series Wave Listen to Me! by Hiroaki Samura, whose previous series include Blade of the Immortal and Die Wegelder.

Protagonist Minare Koda spills her woes in a bar to a stranger who just so happens to work at the local radio station. The next day, she hears her own voice over the radio, confronts the near-stranger in a rage, and is tricked into doing a tiny on-air segment explaining her ranting. But while running out mid-shift at her curry restaurant job might have negative consequences, both the station and listeners are willing to give the newbie radio personality a second try.

Minare is a bit more of a hot mess than even she realized. Yet, despite her quirks and failings, she remains an interesting person who is surprisingly eloquent when the situation calls for it. She can voice her opinions and give reasonings for them in an interesting, fluent manner.

This is very much a slice of life manga. As such, it is a slow tale that tells the day-to-day life of Minare, taking its time to get to the title of the series. All of the characters are flawed individuals. Some are selfish. Some don’t really listen to those around them, despite stating they’re acting in that person’s best interest. There’s drama. And a lot of the characters aren’t necessarily the most selfless of people. But they are certainly interesting to read about.

Overall, I enjoyed reading about the flawed characters and Minare’s unique circumstances. However, there were some decisions regarding the manga that I found somewhat questionable. There are an excessive amount of footnotes. While getting extra information on things like references to other works or explanations of local companies or Japanese culture is always fun, their placement between panels was questionable to me. Having so much information between panels is distracting at best, and is sometimes quite difficult to read. There was also a tendency to over-explain things. Certain names of stores, for example, were explained thoroughly in notes when context made it quite clear characters were talking about some kind of local convenience store. It was when edamame was explained in a footnote that I drew the line. (At least in my area you can find edamame in every Asian restaurant, Japanese or otherwise, and in the frozen section of the grocery store.)

Watching or reading stories with characters who are a bit of a mess and plots that have a sort of train wreck feel can be quite interesting to read, nonetheless, so I did find myself enjoying the story. That said, a lot of this first volume is set-up. There isn’t too much of Minare actually working at the radio station. The majority does revolve around the restaurant she works at, her coworkers there, and how this unexpected radio segment changes her life and forces her to reprioritize certain things.

I am interested to see where the series goes from this point. Wave Listen to Me! Vol. 1  by Hiroaki Samura is certainly an interesting story. If the anime is something you’ve been enjoying, I would suggest giving the manga a try as well.