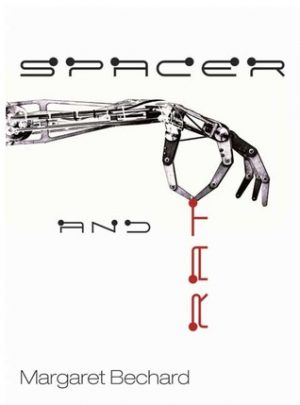 
I recently picked up a copy of an old library book at a used book sale. It had a minimalistic, but interesting looking cover, an author I wasn’t familiar with, and title I’d never heard. So of course I picked it up immediately. Spacer and Rat by Margaret Bechard is a young adult science fiction novel that I am very happy I discovered by accident.

This book is a story about two teenagers living on a space station. Jack is a Spacer, a native of the space stations that dot the galaxy, whose aptitude tests placed him in the food service industry. Food isn’t the only thing he deals with over at Gert’s place. It’s also known for its shadier deals. Kit is an Earther, born on the shattered remains of Earth, known most commonly as a Rat. Kit challenges everything Jack knows, including what it means to be human.

At a mere 192 pages with rather large typeface, I got through this novel very quickly. Whatever it may lack in page length it makes up for in content. A lot happens within these pages. The book explores friendship, loyalty, and what it means to be human.

Spacer and Rat felt a bit more speculative than some of the young adult speculative fiction I’ve read recently. It delves into some hard questions. What makes a person human? Who are the people important to you and why? Is family the people who you’re related to by blood, or is family something more than that? All of these questions and their answers are handled deftly and with a careful hand.

You know what made me happiest? There wasn’t any romance! I know, I know. What a killjoy.

But, honestly, it was very refreshing to find a novel where the main characters are enemies who learn to be friends rather than enemies who immediately enter a whirlwind romance. Both Jack and Kit grow a lot over the course of the novel. Both have insecurities and deep flaws to overcome. Kit will stop at nothing to make good on a promise to her deceased father. Jack just wants to make some extra cash before he’s transferred to a different, more affluent space station. Both must learn to trust one another, something made very difficult by Jack’s prejudice against Earthers.

And, my god, the prejudice here is deep, unrelenting, and horrible. Kit is rightfully horrified and afraid of the people Jack calls friend. But, slowly, Jack begins to question what he’s thinks and what he’s been taught. The amount of hate Spacers have for Earthers is intense, and there is a very real dystopic feel underlying the plot. We don’t get to see too much of this, however. This story focuses very much on the microcosm of Jack’s world – the shop he works at and the station in general.

The world this book is set in is very interesting. We get glimpses of a lot more of what’s happening outside of the space station. There’s dissent between different space stations. Earth is a toxic mess, a place where the only people live there are those who can’t afford to leave. It is unfortunate that this isn’t a series. At least, not to my knowledge. I would love to learn more about this universe, especially through a story of bigger scope.

The book is very atmospheric with decent world building. There isn’t really any time taken out to explain the history of this futuristic world or how humanity came to populate space. World building is done largely through dialogue while managing to never feel very exposition-y. This is something I loved and really admired, though I can see some readers not appreciating it as much I did.

However, there is one thing I want to warn readers about. The characters speak using slang, especially curse words, unique to their world. While I enjoyed this and think it added a lot to the setting, I can see a lot of people not liking this. Now, it isn’t as bad as some novels. But nearly no modern day curses, to use one example, are used, the characters instead using words and phrases unique to the place and time. This didn’t feel forced on part of the author and I never found it annoying, but for anyone who would, do be warned as this is used liberally throughout the novel.

There were a lot of cute, wonderful touches to the story as well. The vast majority of the space ships mentioned that dock at the space station are named after science fiction masters. There is the Larry Niven and the Ray Bradbury, among others. I also loved how the maintenance robot is named Waldo.

Speaking of Waldo, I really loved that character. The juxtaposition of a commonplace robot with sentience was wonderful. While incredibly advanced in some ways, he is still a regular looking, older model maintenance robot. Ironically, Waldo is probably the character with the most heart in the entire novel. For being a robot, he’s very human. It’s not every day that one of the characters you can identify the most closely with is a robot.

I definitely recommend reading Spacer and Rat by Margaret Bechard. This is a fantastic YA sci-fi story that will appeal to fans of young adult dystopian novels as well as general young adult novels. If you don’t like invented curse words or books with darker undertones, this one might not be for you.