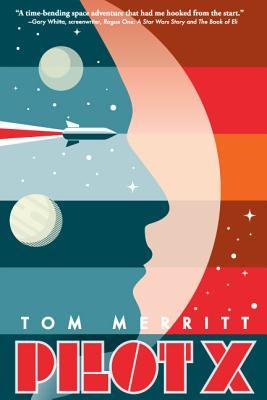 
Pilot X is a new science fiction novel by Tom Merritt being released today, March 14, 2017. This is a fun, fast read, perfect for a lazy weekend. Which, incidentally, is exactly when I read this book.

So what did I think of it?

In this book we follow our main character, Pilot X, as he flies through space and time in his ship Verity while rising through the ranks of his home planet. Pilot X is an Alendan, a race of humanoid beings who have mastered the art of time travel who have dedicated their lives to preserving proper timelines and overall policing of the galaxy. Many years are spent by Pilot X brokering peace with the Alendan’s longtime enemies, the Sensaurians and the Progons. Only, it was a false peace Pilot X was unwittingly brokering. There are deeper, hidden motives and the entire fabric of reality is threatened by a devastating war hidden from the entire galaxy.

The prose is straightforward, not flowery or very descriptive. If you are looking for long, beautiful paragraphs about the scenery, this book isn’t for you. However, if you’re looking for a fast paced adventure through time and space with direct and humorous prose, this is the book for you.

For better or worse, the story is reminiscent of Doctor Who. And I mean very reminiscent.

The Alendans are, basically, Time Lords. Their worries are fairly aligned with traditional Time Lord concerns. You know, preserving fixed points in time and the like. There are a couple of wonderful scenes where Pilot X confronts his enemies with small speeches of the sort the Doctor uses.

So, it might not be overly original. But it was still tons of fun. Things get a little ‘timey-wimey’ in a few places. I was a bit confused by the logic and surprisingly non-paradox inducing scene where Pilox X spends a total of four years with two other versions of himself. Hard sci-fi this is not. But, again, this book was tons of fun.

While I did enjoy this novel, it did take me some time to get into this novel. I think part of this is the main character. Pilot X definitely had much more personality in the latter half of the book. Now, I understand why this is, and I actually rather admire the author for constructing the character this way. We follow Pilot X over the course of many years. The character development within that time is palpable, particularly in his personality. Even Verity’s AI system has character development.

Still, I did enjoy reading about the person Pilot X became more as opposed to the person he started out as.

If you’re looking for a sci-fi adventure story to read on your commute or a deep space time travel novel to pass the time until a new season of Doctor Who comes out (it feels like it’s been ages since we’ve gotten a new season of that show) then you should pick up a copy of Pilot X. It’s a fun, exciting space adventure that is sure to please.