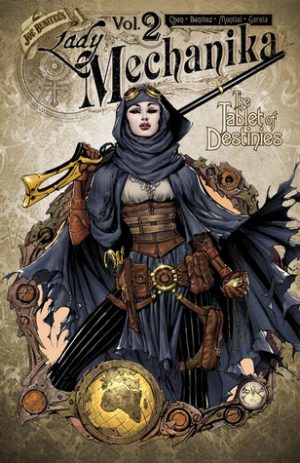 If you’re not familiar with the series you can see what we thought of the first volume, Lady Mechanika Vol. 1: Mystery of the Mechanical Corpse here.

If you are looking for a graphic novel with gorgeous artwork, look no further. The Lady Mechanika series has you well covered. Having read more manga than full color American graphic novels I often find myself in awe, staring at the pages longer than necessary, and making it take much longer to finish graphic novels (especially this series) than other books. Honestly, this series is worth picking up for the art alone.

However, as wonderful as the art itself is, I did find the plot a bit lacking, especially in comparison to Volume 1.

Lady Mechanika Vol 2: The Tablet of Destinies follows our heroine, Lady Mechanika, on another adventure. A little girl named Fred appears on her doorstep unannounced, her grandfather missing after leaving for an archaeological expedition, and fresh from an attempted kidnapping. It is, more or less, a plot straight from Indiana Jones, complete with German enemies, a lost city, and an ultimate weapon made by the ancients.

I’ve always liked Indiana Jones, and a part of me did enjoy this. However, in a lot of ways this volume didn’t match the first in terms of tone, plotting, or setting. Besides Mechanika, none of the characters are the same. While this isn’t too unusual, there were a good number of characters introduced and almost none of them are spoken of at all in this volume. The opening pages where Mechanika is with a group hunting large ape-like creatures was decent enough and gave a bit more insight as to Mechanka’s personality, but it had little to no bearing on the rest of the plot. The only place where it was briefly recalled really didn’t need to have us see this section at all. It wasn’t very important and could have easily been handled in nearly exactly the same way only without several pages of visuals.

Despite having a soft spot for adventure stories like the one told here, I must say that it did feel more like an entire volume of filler. We don’t get much forward movement on any of the overarching plot established with volume one nor are we learning more about Mechanika’s backstory. Her name is still a mystery and the villains who were still alive at the end of the first volume are still on the loose as far as we are aware.

The steampunk setting felt more like a veneer in this volume rather than an actual mechanic of the world. Volume 1 incorporated the setting in ways that felt true to the world. Steam powered and clockwork devices were not only faithfully portrayed but integral to the story. There was none of that within this volume. The steampunk elements were barely there, never used to their full potential. Besides airships there was just about nothing that felt steampunk. The motorcycles felt extremely out of place from what we’d seen within the first volume. I’m not even sure we saw Mechanika use her mechanical limbs to the best of her ability, as we did with the first volume.

There were some very interesting characters introduced. I really liked Fred. She is a wonderful, bright little girl who isn’t nearly as annoying at the little girl featured in the first volume. Fred’s clever, resourceful, and genuinely sweet. I really hope we see more of her. Akina was also a good character. I liked the background of Akina’s people, but I’m not sure it was worth the time explaining everything. They didn’t have too much bearing on the plot, and I can’t see them being easily incorporated into the story in the future short of Mechanika returning to Africa.

Now, don’t get me wrong. The story was good. The pacing was excellent and we get some hints at character development for Mechanika. The plot is easy to follow and easy to enjoy. This volume even allows first time readers to jump into the story without worrying too much about background and overarching series plot threads. But, in all, this volume felt like filler. A decent adventure story which could quite easily fit within Mechanika’s life, but at the expense of any plot or characters relevant to the first volume. None of the questions left from Volume 1 are answered. We learn nothing new about Mechanika, her background, or the villains of the previous volume. While the story told was fun, Mechanika could have been replaced by nearly any other adventurous sort without the plot suffering almost at all. It was a generic story for a very good character, which is a bit of a shame.

Bottom line? I will definitely keep reading this series. I do like Mechanika as a character and am very interested to see where the author takes things. Hopefully, though, the next volume will remain a bit closer in spirit to the first. If you enjoy adventure stories, especially those in the spirit of Indiana Jones, this is a graphic novel you’ll love. If you don’t like graphic novels or want a little more steam and gears in your steampunk then this may not be the book for you.