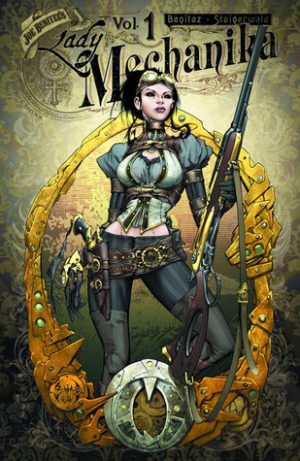 
Lady Mechanika, Vol. 1: Mystery of the Mechanical Corpse by Joe Benitez is a graphic novel series I wish I had picked up sooner. Of late I’ve read multiple stories promised strong female leads which just didn’t deliver, leaving me to spiral into despair that I’d never find a good female lead ever again. Then, behold! This beautifully illustrated graphic novel fell into my lap almost on accident.

But did it quell my unyielding search for a better than average female protagonist?

This volume, Volume 1, contains the entire first mini-series, titled Mystery of the Mechanical Corpse, as well as a prequel chapter and art gallery of alternate covers. The story is set in England during the late 19th century and is about a woman known only as, you guessed it, Lady Mechanika. She is no longer quite human. Her eyes are the wrong color let alone the mechanical limbs she bears. With no memory of her prior life, she is determined to find the answers she so desperately seeks. It isn’t long before Mechanika comes into contact with some rather unscrupulous characters, people connected to her past who seem to still be up to old schemes. But this time she’s tracking them in connection to the corpse of a woman found a train station, a woman who also is part mechanical, a corpse which Mechanika is determined to learn as much about as she can.

I have to commend the author on just how well steampunk is portrayed her. I’ve felt that some of the steampunk novels I’ve read as of late aren’t truly steampunk. Instead the steampunk elements are just a thin veneer to make the world more interesting without having any sort of bearing on the plot or the world the story is set in. Lady Mechanika does not fit in this pseudo-steampunk category at all. Instead of a thin veneer, Steampunk elements are integral to the plot in this graphic novel.

Now, since this is steampunk, and one so close to the textbook definition of the genre, Victorian society is prevalent here. Most importantly, this includes language. For the most part, the characters all speak in a language that is rather true to the time period. Now, I can see this turning some readers off. Just keep in mind that this is Victorian England. If you aren’t used to the sort of language used during that time or have trouble reading accents in dialogue, be forewarned.

On that note, I do want to point out the clothes. The outfits, specifically the dresses Mechanika wears, are very beautiful. More than that, this graphic novel breaks a format I’ve seen in anything visual based – graphic novels, manga, comics. Hell, I can throw TV shows and video games in there, too. The main character changes clothes! Mechanika doesn’t stay in just one outfit. Hell, she doesn’t even stay in two. Many other writers would have made things a little easier on themselves if only from an artistic perspective and given Mechanika one outfit to fight in and one to go around town in so she was seen as a proper lady. Instead, we have Mechanika in multiple dresses.

I like this for multiple reasons. Not only does this put a pet peeve of mine to rest, but it also shows Mechanika in a very human light. Here we have a very strong, very independent woman. She can more than hold her own in a fight. She doesn’t act demure and ‘ladylike’ as some of the male characters first expect of her. And yet, she still acts feminine. Mechanika wears dresses when not planning on any stealth or subterfuge and not hunting monsters or other enemies. Not only that, but she’s clearly wearing makeup as well, both her fighting and everyday attire. This is a point of contention within the novel, the daughter of Dr. Littleton not believing Lady Mechanika is who she claims to be based largely on the fact that she isn’t dressed appropriately, matching neither the popular in-world stories built up around her persona nor her idea of how a woman like Mechanika would or should go into battle.

The art in this graphic novel is absolutely beautiful. Colors are bright and vivid when they are supposed to be. Scenes at night or indoors are shaded with dark overtones. The light emitted from weapons and other objects casts a visible glow that which surrounds them. It’s very well crafted, and a graphic novel I would honestly encourage skeptical readers to take a look at just for the art alone.

The plot is, for the most part, very good. The fight scenes were exciting, though the characters did seem to enjoy stopping for a chat halfway through. This isn’t a very large issue, though I can see this irking some people’s pet peeves. Now, there is an issue I’ve seen during the fight scenes with Mechanika. She is portrayed as rather merciful, perhaps a bit too merciful. Multiple villains are cornered, wounded, and then allowed to live. There is no attempt at bringing them to justice, so to speak. They are simply left in the gutter to live or die as they will. Of course they live, and of course they return more powerful and definitely bent on finding Mechanika once again. Now, this does immediately bring Mechanika’s critical thinking skills into question, but I can see her doing this based on what we see of her personality.

This isn’t always a super-fast-paced novel. There is down time and the characters do talk and explain things like backstory or need to know world building elements. However, I never felt that the plot was dragging. There was plenty of intrigue and a decent number of fight scenes that were well placed within the story. In all, this is simply the first volume in a series. These gripes may very well not be in present in volume two for the simple fact that we will already be aware of characters, background, and overarching plots. Only time will tell.

Something in particular I liked was spending time with several of the antagonists. These scenes may not have always been particularly long, but they were rather enlightening. We get to see the dynamics and tedious alliances between the villains. We get a lot out of these scenes that mere explanation, even when and if Mechanika knows what’s happening between the villains, would not have pulled of as well.

Lady Mechanika, Vol. 1: Mystery of the Mechanical Corpse by Joe Benitez is a series I will definitely be continuing. If you are looking for a good steampunk or story set in the Victorian era, I’d suggest checking out this title. If you don’t enjoy steampunk or like fast paced, nonstop action you might find this story a bit on the slower side.