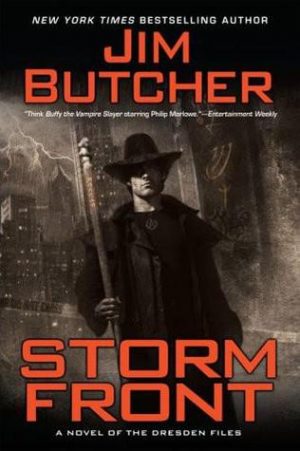 
A friend of mine recommended these books. All he told me was “there’s a wizard, technology fails around him, there are currently fifteen books in the series and you need to read all of them.”

First things first, Harry Dresden, our main character, is a wizard and private investigator in Chicago. He is, for the most part, a good person and someone who, in his own words, can’t turn down a woman in distress. These factors make up a large portion of our narrator’s psychology and how he will react to situations.

These books throw a lot at you at once which, given the point of view of our narrator, makes sense as it seems Harry Dresden, the only professional wizard listed in the phone book, can never catch a lucky break. In this first book of the series we see Harry being hired by a woman, Monica Sells to find her husband who has gone missing. Simultaneously (or nearly anyway) Harry is contacted by Lieutenant Karrin Murphy, the head of Special Investigations Unit in the Chicago PD. Murphy is currently on a case that involves peoples hearts being ripped out of their chests. The odd murders landed in Murphy’s lap because the SI Unit deals with things the normal cops cannot explain. In light of that fact you can expect to see a lot of Karrin Murphy which, for me, is a great thing. Murphy and Dresden have amazing banter and a good, steady working relationship/ pseudo friendship which makes you appreciate both of the characters.

In an effort to both help Murphy and produce results for his client Dresden sets out on the winding path of private invstigation which ultimately leads him to a local crime boss, Gentleman Johnny Marcone. Marcone is one of those bad guys you can’t hate fully but you want to. All three things tie together and Harry has to race against the clock to find out how it call connects before more people die.

Things I loved about this book

The narration is great in the sense that we feel what Dresden feels just by his sarcastic thought process and an easy to understand psyche. An orphan, a wizard with a checkered past (which has him under the constant watch of Warden Morgan of the White Council) and someone who hates injustice Harry is easy to understand. Women and children are a soft spot. He doesn’t deny or ever act, even in his own mind, that he’s better than anyone. It’s refreshing for the hero to be so self aware that he can make jokes at his own expense, mid fight.

The sarcasm and banter throughout, whether with Murphy, Marcone, Morgan, (wow there are a lot of M names in this book,) made me laugh. Harry likes to be a smart-ass and doesn’t deny it. He knows it’ll get him into trouble but like most people with a smart-ass mouth he says it anyway, at his own peril.

Supporting characters, whether it’s the clients, the bad guys, the mentioned but not yet fully seen forces surrounding Chicago or even Dresden’s cat, Mister, are all fleshed out enough for you to understand them but not be distracted by them. Rather than spending pages on describing characters motivations Butcher does a good job of keeping it simple. For example we’ll look at Warden Morgan. Morgan, a Warden of the White Council of Wizards, is an old wizard who does not trust Harry Dresden. Now, for a SPOILER which I think will affect the rest of the series. Harry, in his youth, killed his mentor Justin DuMorne, whom had been trying to brainwash him into becoming a Warlock (dark wizard, essentially.) As a result Harry was shown a rare instance of lienancy by the White Council and placed under the Doom of Damolces which meant one thing; if Harry broke another law of magic, he’d be killed.

Resulting from, in Morgan’s eyes, Harry’s successful escape from justice, Warden Morgan often accuses and tracks Dresden, trying to prove to the council that he is evil and that he must be stopped. Morgan, for his part, sees things as very black and white and therefore he cannot abide by Harry’s escaping justice. While I don’t agree with Morgan he is easy to understand and therefore, in a few quick moments of explanation by the author, we know and understand this character who currently plays a minor role in the story.

Also, honestly, I really enjoyed the fact that Dresden’s cat, Mister is a huge tom cat and basically runs the apartment Harry rents out.

Things I didn’t love  about this book

Sometimes Harry was a bit predictable. I could feel the sarcastic smartass line coming from a mile away at times.That didn’t make the sarcasm less enjoyable but it did make Harry, at least linguistically, predictable. Other ways in which he was predictable is whenever he feels a woman is in danger. He doesn’t abide by that and whether you think that makes him sexist or not all it really does is make his moves predictable. He will protect the woman, or girl, in danger with very few exceptions.

My only other complaint was what I usually feel about book series similar to this. You’re invested for so many pages about this issue, this problem and suddenly it’s solved and the book is over. However, given that there are fourteen more books in the series I’m confident that a lot of these issues and characters will pop up again and that is why I will continue reading them.