Review – Ever the Hunted by Erin Summerill 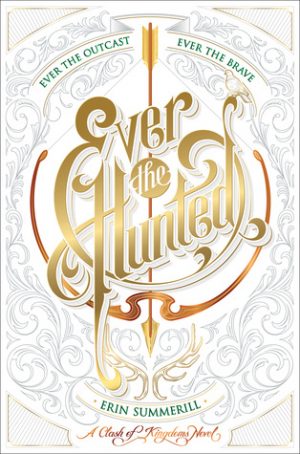 Ever the Hunted
By: Erin Summerill
Website: http://www.erinsummerill.com/
Release Date: December 27, 2016
Publisher: HMH Books for Young Readers
Series: Clash of Kingdoms #1
Received From: Publisher
(All reviews are our own, honest opinions.)
Rating:


The theme of early 2017 seems to be reading books I’ve hyped myself up for only to be grossly disappointed once I read them. When I saw Ever the Hunted by Erin Summerill I instantly wanted it. The cover was absolutely gorgeous, it was a fantasy novel, and the main character was a girl with a bow. That was enough for me. I was so sold!

Then I read the book. And… Well, let’s just say I wasn’t impressed.

Britta Flannery is a hunter and tracker, trained by her father, the king’s best bounty hunter. When her father is murdered, her lands seized, and Britta caught poaching things look dire. But she’ll be given freedom and her father’s lands if she manages to catch her father’s killer. The only suspect is Cohen, her father’s former apprentice, Britta’s only friend, and the boy she loves.

The first thing that caught my attention with this book was the cover. This is probably one of the most beautiful book covers of 2016. It’s all silver, white and gold filigree that just oozes a beautiful fantasy setting. The book is also a quick read. I didn’t feel like I’d read nearly 400 pages, but I had. The prose itself flows fairly well as well.

The rest of the book? Well, it goes from trope-filled to downright problematic. Let me explain why.

First off, we have Britta, a very skilled hunter and tracker who was taught everything she knows by her father, the best bounty hunter in the kingdom. Learning this I expected a very strong, very competent woman who could really kick some ass. What I got was an angsty teenager who liked to whine a lot. At first, I was honestly unfazed about this. Her father was murdered and she nearly starved to death following the mourning protocols of the country. I fully expected this aspect of her to change as the story progressed. But the character development I was waiting for as she continued on her quest and healed from her father’s death never actually came.

To be honest, it wasn’t until I hit more than seventy five percent into the novel that I realized Britta was supposed to be two weeks away from her eighteenth birthday. Why? Because she acts very immature. Not only that, but it didn’t feel like she was probably nearing the end of her training with her father.

This is one of the things I found the most problematic early on. Britta is supposed to be one of the best trackers and hunters in the kingdom. Everyone respects her ability. She’s known as one of the best. Except more often than not she misses the tracks she’s looking for. This happens a lot in the book, from beginning to end. I’m not sure why Britta is touted as a great hunter and tracker. She very frequently misses the signs she’s looking for and she doesn’t actually use her bow that much. There was no real evidence she was actually very good at her job.

Beyond having no visible skill in hunting or tracking past what the author tells us, Britta is dumb as a rock. She can’t see the obvious, even when it’s right in front of her. Despite being nearly eighteen she’s incredibly naïve. She’s whiny. She faints and cries a decent amount. I must admit that one of the ‘villain’ characters was correct when he referred to Britta as a “weepy girl”. Nothing about Britta makes me want to root for her. The only thing she makes me feel is the uncontrollable urge to smack some sense into her.

Speaking of hunting and tracking, this is where I first knew I was going to have some massive problems with the book. Within the opening chapters we have Britta escorted by several guards to find Cohen. How do they go about this? Sitting on horseback wandering outside the castle saying ‘Okay, track him.’ Tracking isn’t magic, and it certainly isn’t done from horseback along a major thoroughfare. It was completely unrealistic and immediately made me question how much background research was done prior to writing this novel.

Every single time something happens the reader can guess it long before Britta ever does, even if the answer is quite literally staring her in the face. This is an issue that permeates the book. The plot and characters are all very, very predictable. If you’ve read a fantasy novel before, especially a young adult fantasy novel, you know what’s going to happen next. The plot and characters are filled with tropes of the genre. Now, this isn’t always a bad thing. A book can be formulaic and still very enjoyable. After all, there is a reason writer’s today still use themes and story structures that have been around for centuries. They work. Always have and always will. This novel is not one of those. There isn’t any feeling of ‘I know what’s going to happen but it’s damn fun getting there’. It’s just stale.

The world building was lacking here as well. In the novel we have two kingdoms on the brink of war. However, I struggled to find any real differences between them. One hates Channelers, the book’s version of magic users, while the other one does not. At one point it’s mentioned that one of the countries speaks in a brogue, inferring the other does not. And that’s it. I honestly cannot tell you any other cultural, artistic, or political differences between the two nations.

The world of Ever the Hunted doesn’t feel like a world. It feels more like a zone in a video game. The characters get from place to place too quickly to give any sense of grand scale. One town is pretty close to another, and most of them seem to be of the same size. Things like the architecture of the buildings or the layout of the streets isn’t included, small things that often go a long way in making a fantasy world feel real.

One thing I am very, very happy about is the lack of a love triangle. I’m not sure this is still going to be the case for the next book in the series with how this one ends. But this novel, at least, doesn’t have one. However, the romance included here is still awkward and unrealistic. Britta doesn’t just get angsty about Cohen. She downright agonizes over it. The majority of the time she’s more interested in either smelling Cohen or whining about him than finding her father’s killer.

The plot point I was most interested in was the one we spent the least time on. I was honestly interested in the King and the plot surrounding him. After all, I was promised mad kings and dark magic in the synopsis. However, I there was very little of both. I felt as if that plot line, which was supposed to be one of the main focuses of the book was poorly fleshed out and rushed. We really didn’t get to spend any time with the king at all. Moreover, Britta never experienced any of this danger herself, merely taking Cohen’s word that something was wrong with the king. This removed all sense of danger for me and made what would otherwise be a very interesting plot feel like less of an issue than it truly was.

Overall, I was massively disappointed in Ever the Hunted by Erin Summerill. What had the potential to be a very good young adult fantasy novel just fell completely short of the mark. If you can push past the tropes and a whiny protagonist, you may like this novel. If you’re looking for a strong protagonist and a fully fleshed out fantasy world, you will probably want to skip this one.