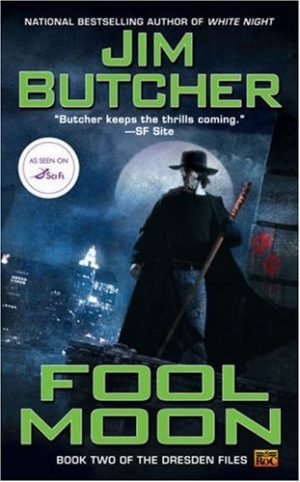 
I continued the series and am very glad I did. It is quickly becoming an obsession of mine and I’m glad I had the foresight to grab the next few books in the series at the same time so I could binge read them. This story, much like the first, has a new case but you get the sense that a lot of these things will connect down the line for Harry. Be wary of spoilers ahead.

The book starts simply, we see Harry consulting with a local magical practitioner, Kim Delaney, whom he likes but won’t give all of the information to, he fears that she is meddling in things above her skill level. Kim walks away upset and before Harry can make it right he is called by Karrin Murphy to consult on a gruesome homicide.

The homicide victim is none other than one of Gentleman Johnny Marcone’s lackeys and this of course brings Marcone back into the picture. He and Harry have some back and forth, with Marcone offering Harry who, at this point is down to his last few dollars, a job as his security advisor. Harry refuses on the grounds that he doesn’t like or trust Marcone. As Harry gets closer to answers things become more complicated. Kim is found dead, next to a summoning circle and Harry is arrested for the murder. He escaped custody but is in an uphill battle to capture the loup-garou, a viscious werewolf, while avoiding falling back into custody and getting shot again.

Things I loved about this book

Harry, trying to do the right thing without exposing Murphy and other “vanilla mortals” as he calls them to too much of the supernatural he digs himself into a deeper hole. We see Murphy’s truest side of herself, a stern, by the book cop not willing to bend the rules as far as protocol but we appreciate that she is willing to think outside the box to catch the person responsible.

We meet the Alphas in this book. A group of college aged kids who are taught by a woman named Tera West to shapeshift. She had been using them to hopefully help deal with the murders and contain her fiance, the loup-garou also known as Harley MacFinn. The Alphas include William “Billy” Borden, Georgia, Alex, Cindy, Tommy, Mitchell, Kirby, Andi, Marcy, Phil and Greg. The group, despite their inexperience, are trying their best to help and protect what they refer to as their area of Chicago, near the university. The banter and strong personalities of some of these character were enjoyable and plus, who doesn’t love sarcastic wolf sounds before a fight?

We see how Harry’s network of mismatch friends come to his rescue. Susan Rodriguez not only gives Harry a ride (in exchange for an exclusive on the story) but she also risks more when helping get the Alphas to freedom. Susan, despite being mostly about business actually cares about Harry and we begin to see a reciprocation of the feelings here.

Side note: I like Harry and Susan but would also be very much okay with Harry and Karrin Murphy though, the tension written into this book makes me believe we’ll see a Harry and Susan pairing first.

I groaned out loud when it was revealed that the FBI agents brought in to deal with the murders were the bad guys. I mean, I knew it was coming, but it was frustrating all the same as it made Harry’s survival, and the survival of those with him, less likely. Still, with so many books left I knew that at least Harry would survive. When it looked like a massacre would happen things worked out for the wizard of Chicago…barely.

Things I didn’t love  about this book

Harry’s character flaw of a woman in trouble needs saving happened again. I think this will continue throughout the books and I’ll just have to accept it. It’s not a bad thing, it just means he’s in trouble more often than not.

I both loved and hated the ending as it resolved the case but left the nagging question of who gave the FBI hexenwolves the shapeshfiting belts?