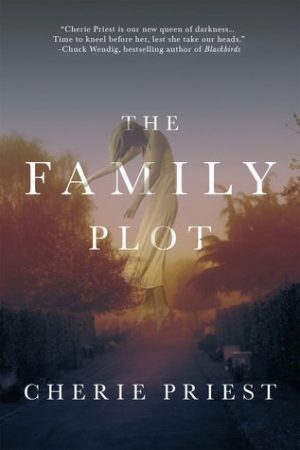 
Every once in a while I just need to read a good ghost story. I haven’t picked one up in some time, so I was quite excited when I discovered The Family Plot by Cherie Priest. This is a ghost story set in the American south at a beautiful old mansion which holds more then the usual dusty family secrets and furniture for the salvage team to pick through.

The main character is Dahlia, the daughter of Chuck Dutton, owner of Music City Salvage, a salvage company in Tennessee. They’re the ones who go into old buildings and take out anything of value to sell. Furniture, hardware, light fixtures, old wooden doors, copper roofing – everything that would fetch a price worth the labor. When the elderly August Winthrow walks in offering her family mansion along with its outbuildings for only $40,000 Chuck is torn. It’s a make or break deal. If the mansion is really as magnificent as August claims it could solve all of Music City Salvage’s monetary problems. If not, they’re sunk.

Dahlia and the crew have no choice but to camp out in the mansion to save what little cash they have left. But something isn’t right. The facts Augusta gave Dahlia’s father and the property itself don’t quite match up. The cemetery wasn’t mentioned at all, and the house itself is in great condition for a condemned building. And she definitely didn’t mention whatever is lurking the property.

One of the things I really liked was how they approached the ghosts. Other stories involving haunted houses, poltergeists, ghosts, and other paranormal phenomena often have a section where the main characters questions themselves. Are ghosts real? Are they imagining things? The Family Plot doesn’t do this. Dahlia never questions if the ghosts are real, instead believing her staff and taking everything in stride. Ghosts are a simply an occupational hazard. She’s seen things before and, even if no one talks about it too much, others in the salvage business have as well. Everyone has a story.

There is a lot of family dynamics involved in this tale for both the present day main characters and the former inhabitants of the house. I wouldn’t necessarily call any of this true drama. But things are a tense. Dahlia works with her cousin – someone she was once very close with but whose relationship is strained due to his being best friends with her ex-husband and taking sides during the breakup – as well as his son, who is often trapped in the middle.

These family dynamics add a lot to the story. We see the characters go from simply trying to get along for five days in close quarters, to working together to save the family business once the truth of their financial struggles become open knowledge, to learning how to rely on one another as they used to. I liked this aspect of the story and it came across as very real. As much as their personalities clash, as much as both of them have real, understandable reasons to feel the way they do, they still come together, drawn partially through the situation and partially from the nostalgia of exploring this old property just as they did when they were children.

I also enjoyed the mystery aspect of the novel. As the team scrambles to salvage as much as they can before the mansion is demolished, they are drawn deeper into the mystery of what happened there long ago. Dahlia especially is drawn to the mystery and has a real need to solve it. This seems to go above mere curiosity. She’s the head of the team and she wants to keep her employees safe. However, I did feel as if the mystery to be unraveled was a little disappointing in the end. We go from having Dahlia figuring out the mystery herself to having the answers given to her, in a sense. I felt like that undermined a lot of the mystery plot line, especially with the added abilities of the poltergeists which only show up, without any prior hints, at the end. There was a real ‘this is interesting, but where did this come from’ feel about the ending.

Despite loving ghost stories, especially haunted house stories, I often find that the endings land somewhere on the scale from unsatisfying to problematic. This is another novel whose ending I’m torn with. While reading it, I did enjoy the ending to a point. Not so much with the Epilogue. I rarely enjoy epilogues. More often than not I find epilogues unnecessary at best and completely inane at worst. This epilogue falls somewhere in the middle of that scale. In order to remain spoiler free, let’s just say that I had hoped to be an almost comedic element within the last few chapters was brought into fruition, becoming its true trope-self we’ve seen before.

The rest of the book really doesn’t lean on tropes too much, for which I am grateful. It was fun, filled with mystery, and honestly scared me. Yeah, that’s right. I was honestly scared at 10am in my bright, sunny living room last weekend. I nearly had a heart attack when the cat jumped on the back of my chair.

The first half to two thirds of the book I found more frightening than the last part. Within the first half, and perhaps a bit beyond, there is more of a sense of suspense rather than true poltergeist activity or horror. Scenes are frightening because the characters are afraid. Since we follow Dahlia’s point of view we don’t see what the other characters are experiencing. Instead, we see them afraid, terrified even, with only hints and snippets of what they’ve encountered and Dahlia’s own experiences to go on. And that was honestly enough to scare me. The author does an amazing job at capturing the fear of the unknown and portraying that fear within her characters.

In all, I enjoyed The Family Plot by Cherie Priest. It’s a great mystery/horror tale perfect for a rainy day. If you like ghost stories and some light horror this is a book you’ll want to pick up. If you don’t like ghost stories or stories involving the supernatural you may want to skip this title.