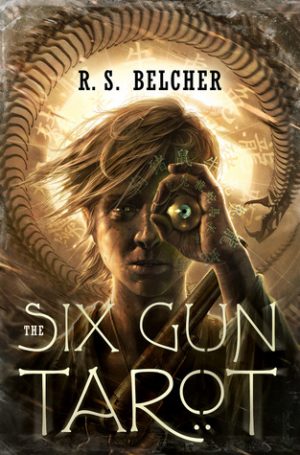 
I have this bad habit of starting a series right in the middle. Sometimes it’s an accident. I don’t bother looking at the small line under the title that says ‘Book 45 of Awesome Series You Need to Read’. Other times it’s deliberate because, for whatever reason, the library just doesn’t have books one and two.

I was actually more intrigued by The Shotgun Arcana by R. S. Belcher than I was by the synopsis of The Six Gun Tarot . But I was good this time and started at the very beginning of the Golgotha series instead of with book two like I normally would.

And I am very happy I did.

The Six Gun Tarot is the debut novel of R. S. Belcher, and it is one hell of a wild ride through the Weird West. The book is gritty, filled with myth, cults, fantasy, horror, and characters that stick with you long after the last page. If you want to know what Weird Westerns are, this is a prime example and a great place to delve into the genre for the first time.

The plot is centered around Golgotha, a small town in the Midwest during the late 1800s. It was a mining town once, but now the silver’s mostly been dug out and gone, a fact the new owners of the mine seem to be ignoring. The only thing that prevents the town from emptying out and turning into one of the many ghost towns peppering the west is its location. They sit on the very edge of the 40-Mile, a long stretch of inhospitable desert that’s claimed many a man, with Golgotha being the last stop for water and food. Golgotha’s a strange place, though, attracting the lost, the forsaken, and the not quite human. So when Jim Negry shows up just outside of town, half dead, with a mysterious jade eye in his pocket carved with symbols he can’t read, everyone knows he’s just found home. But there are other things in Golgotha, too. Things that should never have woken. Things that threaten not only the town, but the universe itself.

There is a lot held within these 361 pages. The story is told in the third person, the viewpoint switching to many, if not most, of the towns inhabitants at one point or another. If you don’t like omniscient or semi-omniscient point of view, be warned.

The cast is a very varied, rather all-inclusive one. Jim is a boy on the run, having committed a crime back home in West Virginia. Mutt, the deputy, is half-human. The sheriff himself is a man who can’t die; he has the scars to prove it, too. The mayor, one of the most prominent citizens in town and a respected elder of the Mormon community, is very much in love with Ringo, the man who plays the piano down at one of the bars. Maude is part of the Cult of Lilith, a long line of women who were pirates and warriors, now settled down with a banker and a daughter of her own. And that’s only the beginning.

While I honestly loved all of the characters, there were times where it felt as if there were too many competing points of view. Some of the characters never quite crossed paths, their stories never really overlapping in any significant way and had little to do with the majority of the real plot. There were times where I wished the plot would go back to other things – the main plot of the town being consumed by an evil darkness and the thing hidden away in the old silver mine, and what happened to make Jim run from home. Still, the tales involving characters like Gillian and Auggie, were wonderful. They added depth to the town, made it fuller, more alive, and showed what sort of a place Golgotha really is and the sort of people who stumble their way there and call it home.

Though the plot is interesting and exciting, The Six-Gun Tarot can feel very slow. We are bombarded with flashbacks quite often. For the most part, they do a wonderful job of providing the insight and knowledge we need. Every character is interesting, and every background fleshed out, or at least fleshed out enough to make their actions feel real and believable. However, flashbacks are plentiful, and sometimes go one for pages and pages at a time. I found myself snapped out of the action rather abruptly several times. Most distracting was the flashback in the middle of the story’s climax. Being taken out of the action and then dropped back into the middle of it so abruptly was jarring to the extreme.

Despite this, every scene is very deliberate. The actions of characters, their small movements as they speak add great depth to these scenes. The book is written in a very captivating manner. I wanted to linger on the page, really soak it in, before moving on. The places where characters who, though living in the same small town, never seem to meet are usually very, very good. So much so that I am very willing to forgive most of the issues I had with pacing. The scene between Jim and Ringo isn’t very long and its the only time they meet in the book. Neither really knows the other to any extent, but Ringo is willing to listen and give advice even as the whole world is falling apart. We learn a lot about both characters in a short amount of time.

Do be warned that this book is dark. Things start out a bit raw and gritty. The setting and characters are all about what you’d expect at the beginning of the story. As the tale progresses the stakes rise to the point where the universe as we know it is in danger. At the same time the story grows exponentially darker both literally (as Golgotha is shrouded in starless, perpetual night) and in a more metaphorical sense. There is a very real sense of horror here, and I think fans of that genre would find a lot to like in this book.

The Six-Gun Tarot is an incredible first novel that has me clamoring for more. Despite any issues I had with it, I found myself really enjoying the book, fully invested in the characters, and surprised at every turn. I already have the second book in the series, The Shotgun Arcana, sitting on my shelf, and definitely plan on reading it. If you like Weird Westerns or dark fantasy this is a book you need to read. If you don’t like slower pacing or dark, sometimes graphic imagery, this one may not be for you.