Review – The Beast of Cretacea by Todd Strasser 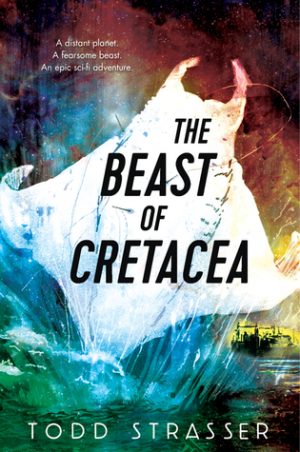 
Sometimes you don’t ever hear about the best books. Not from a friend. Not from the internet. Not from the thousand and one subscriptions that hit your inbox daily. Sometimes you just have to stumble upon them. And that’s exactly how I discovered The Beast of Cretacea by Todd Strasser. I found this one at the library, tucked into the regular circulation stacks when I was busy wondering when exactly the first book in The Raven Cycle by Maggie Stiefvater was going to be returned so I could finally begin that series. And then I saw this one, the spine a mix of color with a title that made the story sound ripe with adventure.

So I did what I always do. Picked up the book without so much as a glance at the synopsis on the inside flap and never looked back.

This is a retelling, as so many books seem to be these days. But this one is very unique both in what it is a retelling of and the methods used. The Beast of Cretacea is a retelling of Moby Dick by Herman Melville. Set on a dying planet, this story is about a young man desperate to pay for his adoptive family to escape off-planet before the oxygen reach lethal levels, while struggling with his new position on board a ship with a crazed captain hell bent on catching and killing the legendary white terrafin.

Okay. I know ‘retelling of Moby Dick’ sounds daunting at best and maybe boring and stuffy at worst. But it isn’t. I promise! There aren’t any long passages focused solely on how a boat works and the language isn’t that of the 19th century. This is sci-fi adventure at its finest, taking a classic tale and placing it in the far future in a rather dystopian society with new, fascinating subplots.

Okay. So what exactly is the plot, you ask?

Ishmael has been transported to another planet with several others to work on a fishing ship. It’s the first time he’s been away from Earth, the tiny home he shares with his adoptive brother and parents, and the dangerous, smoggy streets of Black Range. Not only is this off-planet service a requirement for those his age, but Ishmael must accrue $10,000 to get his family off of Earth. According to Old Ben, who knows just about everything, the oxygen production plants just can’t keep up anymore. Oxygen levels are dipping dangerously low and it’s only a matter of time before what little life is left on earth is completely extinguished.

But the easy path to success of ‘catch big fish = make lots of cash’ is hindered by surly crewmates, a captain obsessed with catching the largest terrafin ever seen while ignoring all other possible prey and his ship’s needs, pirate attacks, and more. There are rumors, too. That there’s a class of people who have real food instead of Natrient packs, have clean air, and all the fresh water they could want. And Old Ben left him with a cryptic message just before Ishmael left, a confusing message that simply couldn’t be true. Or could it?

This book is one of the best books I have read in some time. The most basic of plots is simple. Boy must catch giant fish. But the book is so much more than that. We have dystopian civilizations, shadow governments, secret collectives, a dying Earth, a new world called Cretacea, a furtive island society, and a decent amount of interpersonal relationships and character development.

The characters were all very well plotted and developed. Each have their own motivations for being on Cretacea as well as reasons for their actions throughout the novel. This wasn’t just a case of ‘I need the plot to do this so I’ll make a character do X’. These characters have their own hopes and dreams. More than that, even those who were friends didn’t always agree on the correct course of action and always had very solid reasoning for doing so. Limits were pushed and friendships tested in real, believable ways.

Despite there being a lot going on in this book, interpersonal and plot/sub-plot wise, at no point did it feel confusing. Everything is laid out in a very straightforward manner with no convoluted explanations or the like. The chapters are short and succinct, usually ending at the end of a scene, helping the book to feel as if it is moving faster than it sometimes actually is.

Something I thought very interesting was the author’s use of tenses. The majority of the book is written in the third person, present tense from Ishmael’s point of view. This gives the action a feel of immediacy, as if it’s happening right now, right in front of you. Flashbacks are presented in their own short chapters, usually only two or three pages long at the most. These flashbacks are all written in past tense, making it very apparent what is happening right now, and what we are seeing in retrospect. This is a technique I have not often seen, and it worked very well here.

Though I initially found this title within the young adult section at the library, it would definitely appeal to readers of adult novels and adult science fiction as well. The characters may be a bit on the young-ish side if you don’t normally read young adult novels, but they are from a dying world and were forced to grow up quickly. None of them, especially Ishmael, act immature or blunder their way through the novel as is sometimes seen in YA lit. They are very mature characters dealing with difficult situations and interpersonal issues focusing on issues like class. While romance is hinted at, there is nothing overt. Romance doesn’t take over the story, remaining a barely there feature that enhances rather than steals the plot.

I highly suggest taking a look at The Beast of Cretacea by Todd Strasser. In a publishing world ripe with retellings of old classics this is one that deserves to be at the top of everyone’s list, and a fantastic science fiction adventure novel sure to please fans of the genre. If you don’t like science fiction, or prefer romance-heavy young adult novels this book may not be exactly what you’re looking for.