Review – Rebel of the Sands by Alwyn Hamilton 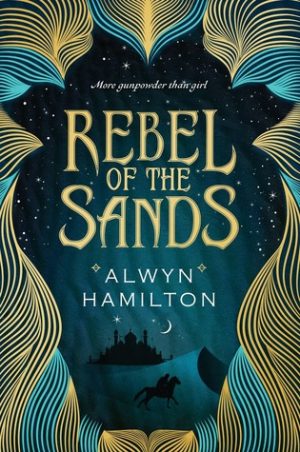 
Rebel of the Sands by Alwyn Hamilton was a book I’d heard mentioned quiet often, but didn’t know much about. I picked it up on somewhat of a whim when I was at the library, not quite knowing what to expect, just a little miffed that the first book in the series I was originally searching for wasn’t returned yet.

So what did I think about this book?

This is the story of Amani, a teenage girl who will do anything to leave Dustwalk. She’s a sharpshooter who has no problems dressing up as a boy and doing just about anything to escape. Along the way she meets Jin, a boy about her own age being hunted by the army.

Let’s be up front about this. This is a book about walking. Personally, I don’t have much of an issue with books about walking. But the fact of the matter is that the vast majority of the book follows Amani as she first tries to escape Dustwalk before simply following her as she travels towards the capital city where her Aunt is supposedly living. If you do not like books with more walking than plot heavy action, do be forewarned.

That being said, there were sections where the plot dragged. The plot is a basic one – escape Dustwalk. And that was enough to keep my attention for some time. However, I did keep reading to see where they were going and where the rest of the plot would be as the initial intent of escaping was over rather quickly.

As for the characters, Amani is rather generic as far as heroines in YA literature go. Despite this, I do think there are some very good aspects to her, and I did like her as a character when I normally find cookie-cutter characters unpalatable. Amani doesn’t fall into the continuously angsty thoughts about her love interest as many others do. When she threatens to fall into anxiety, angst, and an identity crisis Jin tells her to pick up her gun, put her big girl panties back on, and get the hell back out there. And this is something that I absolutely loved. It is quite easy to fall into the ‘oh woe is me/I’m not who I thought I was/I’m so different’ mentality. At least in YA lit it is. Here, that is stomped out very quickly which I am absolutely thrilled about.

I did like Amani’s character development. Due to some of the other books I’ve read recently, I was over the moon there was any character development at all. I must admit, though, that a good number of the other character’s actions were predicable up to a point. On the other hand, I didn’t absolutely despise them the way I do with other similar characters. Why? Personality. Though they might have been rather firmly based in the tropes of the genre the vast majority of the characters had their own personalities and their own reasons for their actions. The secondary and side characters were all rather likable and had interesting backgrounds. I would love to learn more about them.

While I like the world the story is set in, I did find some problems with it. I really loved the Middle Eastern mythology and setting woven into the tale. I also like Westerns. I’ve watched dozens of spaghetti westerns with my dad; it was a Sunday afternoon ritual for years. But there were times where the two sides just didn’t feel at all coherent. We went from a Wild West opening chapter to a Middle Eastern feel to the next. It didn’t quite mesh, not really feeling as if these two chapters were set in the same world. Instead, it pushed things in the opposite direction, making it feel as though Amani was leading two incredibly different lives.

Despite these problems, there is a fair amount of world building within the novel. We learn the origin story for this world. We learn about the last two or so kings. And we see some mythological creatures. Yes, this novel does include magic. While mentioned in the first few chapters, it really doesn’t come into play in any sort of significant way until later in the story.

Okay. Let’s talk about Jin for a minute. This is the second main character in the novel, our male lead. Did I like this character? Yes. I did. No, we didn’t really need the multiple descriptions of his chest muscles, but I still really liked his character. One question I did have was why Jin was alone in Dustwalk when the book opened. This seemed rather odd to me after reaching the end of the novel, even if only because most of the other characters are always seen to be traveling in pairs. (You’ll know what I mean when you get there). All I can say is that he was alone instead of in a group because the plot required him to be, not fitting in with things we learn and see later in the novel.

Here’s the thing. I gave Rebel of the Sands a solid three stars. It was fun and had some interesting characters. However, I would have given the book four or five stars if told from Jin’s point of view instead of Amani’s. There is one huge issue with seeing this story from Amani’s point of view and following her story. There is not much of a story there, and she’s just a bit of a cookie cutter main character. The real meat of the story heavily revolves around Jin and Ahmed, especially, it looks, as we go further into the series. And I am more than fine with that. That’s what I’m interested in. That’s what I want to see. For the majority of the book I was much more interested in Jin as a character than Amani.

Did I like Rebel of the Sands by Alwyn Hamilton? Yeah, I did. It was fun and, once we finally get there, has a very interesting plot that really hooks you in, even if the getting there is potentially slow. I definitely plan on reading the sequel once it comes out. If you like YA fantasy and mythology this is a title you’ll want to pick up. If you don’t like ‘books about walking’ a la Lord of the Rings you may want to skip this one.