Review – No Matter How I Look at It, It’s You Guys’ Fault I’m Not Popular, Vol. 3 by Nico Tanigawa 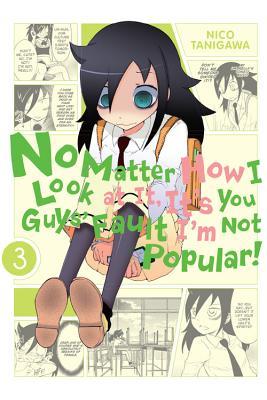 
Here we are again, another volume of No Matter How I Look at It, It’s You Guys’ Fault I’m Not Popular!, Vol. 3 down. This series by Nico Tanigawa, pen name for the two creators of the series, is about Tomoko, high school student determined turn things around from her middle school days, make friends, and talk to boys. Unfortunately, this is harder than it originally sounded. Already at the start of second term, none of Tomoko’s plans have come to fruition.

There were quite a number of moments in this volume where Tomoko makes the belated realization that she should never have wanted whatever it was she was looking for in the first place, even if it’s to fit in better, have something to talk about or get sympathy from, or to stay home from school for a few days. As usual, her plans backfire, some more massively than others.

I like how we see the simultaneous and conflicting inner wishes of Tomoko here. At once she is trying to have something to talk about and seem cool about in the form of falsely telling her friend Yuu that she was groped to taking care of her sick little brother in the hopes that she’ll get sick too and need to stay home the next day and not deal with her social life or lack thereof. The need for friendship and camaraderie is conflicting with her desire to just not be at school or a part of activities at all.

This is very human, and something I think the vast majority of people can relate to. At some point ‘I just give up’ often does overtake, or at least conflict with, ‘maybe it’ll work out this time’.

In either case, the desire for something and how it works out in one’s head often doesn’t coincide with the reality of it. Tomoko doesn’t want to participate in helping her classmates setting up the school festival, and she certainly gets her wish. However, it is most definitely not in the way she desired. After several similar situations, she beings to learn that maybe there are things she should never have wanted in the first place. This is something Tomoko begins to learn, and verbalized later in the volume.

The more subdued, sad feeling we get from Tomoko at times in the second volume continues here, as opposed to the misguided furvor she attacks her problems, real or perceived, in the first volume. Tomoko does seem to be changing, little by little. Maybe not a lot. Maybe not quickly. But she doesn’t feel stagnant, which is something that I feel can happen in slice of life or high school related manga.

This volume is just as relatable as the others. Tomoko, despite her sometimes extreme reactions, is someone who is easy to relate to. The awkward factor is doubled in places simply because we’ve all done or said similar things or been in similar situations and know how things are going to turn out before Tomoko does. We can commiserate with her. And I think this is why I gravitate to this series in particular, as opposed to the plethora of other high school manga.

As for the artwork, there were a few singularly amazing faces (of horror, despair, etc.) Tomoko makes within this volume. This is something I feel was most prevalent in the first volume and I found a bit lacking in the second. Here, while maybe not quite as numerous, we have more of this. And what we get certainly stuck out in my mind after finishing the volume.

If you haven’t already started reading Watamote by Nico Tanigawa, you should. The story is fun and relatable, and the volumes themselves aren’t terribly long and easy to get through. If you like humorous stories or were a fan of the anime, you’ll like this volume.