#ThrowbackThursday Review – Slayers: The Sorcerer of Atlas by Hajime Kanzaka 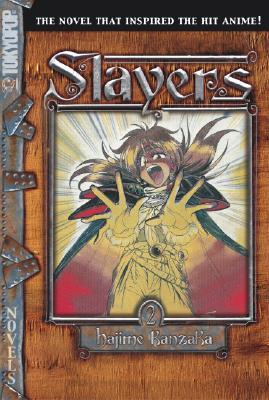 
Happy Throwback Thursday, everyone. A while back we reviewed the first book in the Slayers series Slayers – The Ruby Eye by Hajime Kanzaka. Today we are taking a look at the second novel in the series, The Sorcerer of Atlas.

Lina Inverse, sorceress extraordinaire, is going to take it easy in Atlas City. After the events of the first book, she and her partner in crime, Gourry Gabriev, deserved some good ol’ R&R. But the chairman of the local Sorcerer’s Guild has been missing for some time and things are growing tense between the two sorcerers vying for his position. When Lina is approached for assistance in the matter she initially wants to turn it down. But something doesn’t feel right, and with so many people – both humans and demons – telling her to turn around and walk away, Lina knows that something is going on. And besides, Lina Inverse doesn’t back down to anyone.

Now, for those who have watched the anime, this book roughly coincides with the Atlas City arc in Slayers Next. However, the majority of the story was altered to fit the more overall lighthearted theme of the anime. The sorcerers Lina meets are all competent instead of bumbling, and the overall tone grows progressively darker.

I feel that Slayers is a series readers will either love or hate. The story is told in first person from Lina’s point of view, often breaking the fourth wall as she speaks to the reader.  She can be a bit of an abrasive character. Lina is has a bit of an ego, but the talent to warrant it. At least to a degree. If you like the sort of humor found in the first few pages of the novel, you’ll probably enjoy this series. This sort of humor is found not only in this book, but the series.

I will be honest. The beginning of the book, while humorous, didn’t really keep my attention the same way the first book did, nor did I believe it held the same sort of weight or stakes. However, it is absolutely worth it to stick with this book. The story takes some twists and turns as it progresses, not all of which are completely unforeseen. The plot moves faster as the story continues, with a few fight scenes along the way.

Thought it certainly doesn’t begin this way, the book does become quite dark later on. There is more blood and gore than the first book in the series by a good amount. Despite the lighthearted tone in the beginning, this didn’t feel out of place. Things ramp up in the story quite a bit. What begins as a simple enough job turns into a mess of massive proportions and the tone shifts throughout the novel to reflect this.

One thing which certainly is poised to annoy many readers. A lot of world building and explanation is given to the reader via Gourry’s less than stellar intellect. This can grow very old very fast, and it happened quite often throughout the first half of the novel. I do have to say that Gourry does poke fun at Lina for doing this, especially when her long theories and explanations don’t turn out to be entirely correct, but it does feel a bit too little a bit too late.

While The Sorcerer of Atlas by Hajime Kanzaka didn’t start out terribly strong, it certainly finished on a high note. I do recommend this book. If you are a fan of the anime series or are looking for a quick high fantasy novel this is a book you will want to check out. If you don’t like the humor found within the first book or if having characters stop for a chat dripping with exposition drives you a little crazy, this one might not be for you.