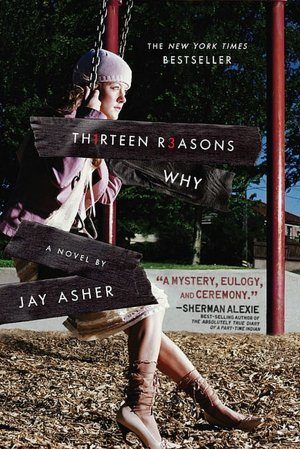 First things first, a warning. If you have heard about the show or the book you know it centers around a teen suicide. Still, knowing it and reading about it/ watching it are two different things. Please be careful when choosing to read this book if these topics are sensitive to you. Other warnings for drug abuse, abusive relationships, violence and rape also apply.

Secondly you should know that the book and the TV show differ in a lot of ways. However, you should also know that according to a few media sources the author, Jay Asher, approved the changes. Whether he actually did or not, I’m not 100% certain on but I’m willing to say that, at the very least, the author is glad these series topics are being looked at by a larger audience nonetheless.

Okay, so let’s get into the book now. Clay Jensen, our narrator, is a nice if not slightly awkward teen who comes home to find a series of cassette tapes on his porch. He plays them and hears the voice of his former classmate (and former crush) Hannah, detailing why she killed herself.  We see two narratives throughout the book as Clay’s thoughts and response to the tapes are our primary source of information and Hannah’s words, which affect Clay so drastically, guide the story and Clay’s response.

Clay, like most teens at the time of this publication and especially now, is need driven. He needs to know what happened, why Hannah chose to commit suicide and why she has him on the tapes. He’s terrified of why he’s on there and also desperately curious to find out why Hannah would make such a choice. He binge reads the tapes in one night. His life is altered completely over the course of that night and we see how it changes him the very next day. He’s hurting, he’s processing but he’s also determined to not repeat the past and be there for someone else who may need him which, may be what Hannah, who had given up, wanted from him and the other people on the list.

And here are perhaps the words of wisdom I hope everyone takes from the book.

This book serves as a cautionary tale of sorts to everyone who may read it. It shows that we must be aware of everyone around us and how our actions can have an impact. Reading this in my freshman year of college (ironically and painfully after a friend had followed Hannah in a sense) was life altering and also cathartic. It made me much more aware and while I’d never been one to bully or gossip (in fact I was usually the subject of both) it made me more aware of what others around me were doing and sort of lit a fire under me to try harder to be there for people and be more aware of my own actions and, when I could, speak up when necessary. Hopefully, whether it’s the book or the TV show, this story has a similar impact on you.