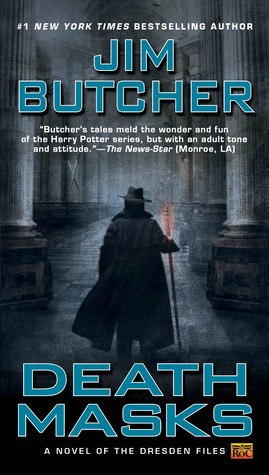 
Harry’s ex, Susan Rodriguez (half-vampire)is back, just in time for evil fallen angels, a duel with the Red Court’s champion, a missing mystical Shroud he’s been asked to help find and a diseased headless corpse that CPD needs help dealing with. If Harry’s life wasn’t already complicated his good friend and Knight of the Cross, Michael Carpenter, is there to help Harry when it’s needed, and throw another wrench into the already complicated few days Harry is having.

This book, like most in the series, has a lot going on it. If you haven’t figured it out yet nothing is simple in Harry Dresden’s world. So when he’s challenged to a duel by Ortega, A Red Court vampire noble, that seems like a bad day already. He’s then attacked by a fallen angel, saved by his friend Michael Carpenter (along with two other Knights of the Cross, Shiro and Sanya.) Michael, acting out of the best intentions, asks Harry to not investigate the case Murphy has asked him to help on (headless corpse, lots of diseases) but they won’t explain why.

After speaking with an oracle spirit Harry learns that Michael, Shiro and Sanya are truly trying to protect him from a prophesized death. However, Harry learns that if he doesn’t get involved, all three Knights will die. With everyone’s hands tied Harry still has to deal with the duel he’s been challenged to.

At the duel we meet the Archive, a seemingly human girl with the entire knowledge of the universe in her mind, and her  body guard, Kincaid. The Archive is a neutral party who is set to ensure the duel follows all the laws of the Accords but Harry cannot help but be fascinated (and amused) that a small girl has so much power and knowledge and yet still has a bed time. The Archive or Ivy as Harry nicknames her is quickly one of the my favorite characters due to her duality in this manner.

Susan attempts to help Harry find the Shroud, after Harry’s near death and the death of a thief occur on a boat, and while Susan and Harry attend the art charity in hopes of locating the Shroud Harry and the Shroud are kidnapped. When he awakens Nicodemus, the leader of the fallen angels known as Denarians makes Harry an offer that he refuses. As this is about to cause his death Shiro arrives to serve as a trade for Harry. Harry, reluctant but unable to do much, escapes only to immediately be on the run with Susan again.

Without wanting to give out too many spoilers I’ll say this: as with any Dresden novel everything is extremely complicated and it’s only through his friends, allies, skill and luck that Harry and nearly everyone survives this most recent attempt by evil forces to take power and wreak chaos on the world.

One thing we do learn, that is important to know and understand going forward, is that Harry’s mentor, Ebanezar  McCoy, is not only extremely powerful (more than Harry had ever guessed at) but also protective as he uses his powers to gain some revenge on the Red Vampire Court.

Something else we learn is that Marcone, who aided Dresden’s survival, took the Shroud in an attempt to heal a comatose girl at a far away hospital. Harry makes a deal that they get three days with the Shroud and it must then be returned to Father Forthill. Marcone agrees and stays at the hospital, leaving Harry frustrated as he finds, again, something in Marcone he can’t fully hate.

Side note, if you thought you’ve heard of the last of the Denarians at the end of this book, the final pages tell you one thing for certain for the rest of the series; they are going to be a constant force going forward. The spoiler here is stunning but I won’t give it away, I’ll just ask you to read it and judge for yourself how, even at a barbecue, Harry’s life can become even more complicated again.

Like the rest of the series there are some excellent, funny quotes in this book. My favorite had to have been the following:

“So. You get handed a holy sword by an archangel, told to go fight the forces of evil, and you somehow remain an atheist. Is that what you’re saying?” -Harry Dresden