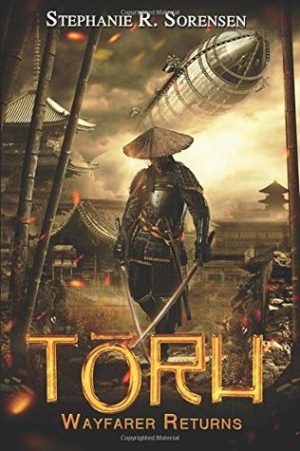 Toru: Wayfarer is an alternate history novel set in Japan during in the 1850s. The main character, Toru, was picked up by an American ship after being found adrift some ways off the coast of Japan. After spending two years in America he returns to his homeland, bringing with him books, blueprints for military goods, and more. But in returning he’s broken Japanese law, and is condemned to death upon his return, despite his warning that America is sending ships to forcibly open Japanese ports to trading, much as they’d done with China. Two shogunate lords first take pity on Toru, then take his warnings to heart, and aid him in protecting Japan from the American forces and a Shogun who refuses to break tradition, even if it is for a greater good, and believe Toru’s word.

I have extremely mixed feelings about this book. To be honest, if I hadn’t gotten this novel from the publisher I may have put it down after the opening chapters. But after sticking with it, I found myself pleasantly surprised by the concluding chapters.

The prose itself is very good, and feels perfect for the location and time period portrayed in the novel. The story is told in the third person, largely from Toru’s point of view. When appropriate, the point of view does switch to some of the other characters. It does so very naturally; at no point did I feel that it jumped too much or grew confused.
There were several issued I had with the opening chapters, the main ones being unrealistic occurrences and extremely slow pacing. The story is by no means fast paced, and the first several chapters in particular felt as if they were dragging. A lot is explained to the viewer, all pertinent to be sure. But it did give certain sections an almost passive tone which I found less engaging. While there are some more fast paced, action-y sequences, these don’t occur until past the halfway point. These scenes were quite well done, and honestly, did make me want to continue reading.

The characters are all very interesting, and it is them that really carry the story. I liked Toru, despite him being just a little too good at just about everything. The cast is rather diverse, at least in the sense of social cast, something which does play a part within the narrative. The characters feel very real, and are, overall, extremely relatable. Their fears are understandable, whether or not they are on the same side as Toru and whether or not the reader agrees with their actions.

Something interesting to note is that some of these characters are real, historical individuals. The most easily spotted is probably Commodore Perry, appearing later in the novel. Other historical figures are sprinkled throughout the tale. The majority of the main characters, however, are all original characters.

I did like the ending of the novel. It was much faster paced than the vast majority of the book. Loose plot threads were wrapped up very nicely, leaving very little unanswered. Despite being the first book in a series, this can absolutely be read as a standalone novel. This is something I really appreciate. There’s real payoff at the end of the novel. It feels like a conclusion to a narrative while leaving room for the characters and world to grow.

Despite liking the characters and overarching plot, there is something that ripped me out of the novel time and time again.

Toru and his companions begin working on building things like factories, trains, and dirigibles at a furious pace. Too furious, really. Within three weeks there were sixteen factories built. Sixteen! That’s completely astounding for any place or time. But considering the time period, location, and the fact that all of this is financed by only minor Lords (as opposed to the very rich, powerful ones met later in the novel), along with lack of transportation, raw materials, and manpower its more than a little jarring. I found myself ripped out of the novel time and again, my suspension of disbelief completely shattered. On a similar note, Toru is good at everything. Sure, part of this is his upbringing. But I did find myself not quite believing just how good he was at things. Fighting, math, languages. There was no subject he seemed unskilled at.

The concentration of these things does seem to be within the first few chapters. This did make getting through the first half of the book particularly difficult. Do similar things appear later in the novel? Yes, but by no means at the same quantity. There were a few time I paused and considered the implausibility at things, but overall the novel took a bit of a more realistic tone.

Also, I found a new pet peeve. The author has a habit of using Japanese words and phrases within the text. I have no issue with this in itself. However, quite often the English translation is included directly afterwards. It may sound funny, but this really grate on me. I do know a bit of common Japanese words and phrases due to nothing but the sheer amount of exposure through anime and manga. Having the English translation directly afterwards made me say ‘yes, yes, I know,’ quite often. Also, I found that this, too, ripped me out of the story. Why would characters who are presumably speaking Japanese to one another repeat words and phrases in conversation? For that matter, why add the Japanese at all? Aren’t they already supposed to be speaking Japanese?

Maybe I’m just overthinking things. Still, if this is a pet peeve of yours as well, take this as your warning.

Now, as for genre, this is most definitely an alternate history. Though it has some steampunk elements, I myself hesitate in calling it steampunk. However, the author does point this fact out in a note at the end of the text. As Sorensen says, this is a world only first building its more modern technology. It’s very easy to see how this could become a very steampunk-like world. There are already dirigibles, seen mostly in later chapters, and steam engines abounding.

Is it steampunk, really? You know what? I don’t really think so, but I see very easily how it could be. I think it’s a fascinating approach, and something I want to see more of in this series.

Despite issues and pet peeves I had with Toru: Wayfarer, it ended on a high note and made me interested to learn what happens next to Toru and his companions. I would honestly enjoy reading the next book in the series. The prose, characters, and plot are all intriguing. If you enjoy alternate history, stories involving Japan, or steampunk this is a book you should definitely check out. If you like more realism in your fiction or don’t enjoy alternate history this book may not be one for you.