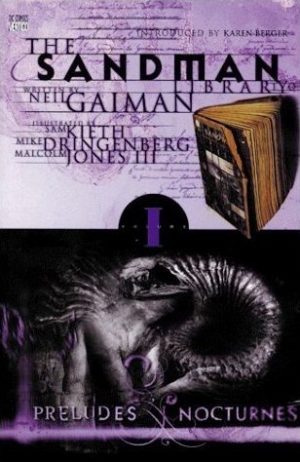 
I was in the used book store attached to my library recently, seeing what new things they’d put on the shelves since the last time I wiped out their stock. Out of curiosity I wandered over to a shelf labeled ‘humor’. There, tucked between copies of newspaper comic strip compilations and stand up comic’s autobiographies was a misplaced copy of Neil Gaiman’s Sandman: Preludes and Nocturns.

A ‘humor’ book this is not. But if you’re looking for some graphic novel horror in your life, you’ve come to the right place.

So what’s Sandman about? The main character is Dream, the being in charge of dreams and nightmares. Preludes and Nocturns is the first volume in the Sandman series by Gaiman’s. The chapters in this volume encompass Dream’s capture and imprisonment, his eventual release, and attempting to find his items of power, which have disappeared during Dream’s long years of imprisonment.

I wasn’t completely sure what to expect when I picked up this volume. I’d heard about Sandman often. However, all I’ve ever really heard in regards to it is this: read it! So I more or less went in blind, a bit more ignorant to the long established DC Comic’s IPs as I really should be, and simply dove in.

The volume was a bit slow to start, but held my attention and made me want to read more. The first chapter shows Dream during his imprisonment and his later release. We don’t get to see our main character do too much in this first chapter, but does set a good stage for the rest of the volume.

The art is fun. The colors are striking, the lines bold and often angry. The color palate changes according to what is occurring. Dreams have a certain feel. Dark, horrific acts have another feel. As for the layout itself, I have mixed feelings. Some pages and chapters felt more normal. Others stood out simply because the flow was so well thought out, dialogue and character movement dragging the eye along the page in a very natural, comfortable way.

Now, this is DC/Vertigo work. So, yes, there are references to the greater DC universe in here. Some mentions are made of other superheroes. The Hulk is referenced at once point. Arkham Asylum is depicted at another. While I don’t think this necessarily drags the story down in any way, I did find it a bit odd. Of course, I’ve read far more manga than comics, so seeing this sort of crossover between franchises always strikes me as odd and wholly unnecessary.

The chapter that felt the most familiar, the one I could immediately identify as being the work of Neil Gaiman was a chapter that was more or less straight horror. A bit ironic, really, as despite the plethora of novels I’ve read by author I can’t really pinpoint anything else that was so close to straight horror. This is where the volume, and the series at large, really come to life. It feels like the story has found its footing here, like it knows what it wants to be and how it’s going to go about it.

In all, I felt like volume took a bit of time to get started and really find itself. Once that happened, though, it hit the ground running. The characters are interesting, the setting fairly dark. I am fully invested now. I want, need, to know what happens next. Not necessarily because this volume ends on any great cliffhanger, but because I want to know what happens to Dream.

Despite being someone with such powers, he’s is quite relatable and surprisingly complex. His story isn’t one simply of revenge. He isn’t the great being he once was either. His glory days feel like a thing of the past and he doesn’t quite seem to know what comes next for him.

I will most definitely be reading more of this series in the future. I have always loved Gaiman’s work, and its quite interesting to see him working within such a different medium. If you like graphic novels or comics, or are looking for a good horror-esque story, read this series. If you aren’t a fan of more cerebral characters (vs. the smash-em-up superheroes), or if you don’t like horror, this might not be what you’re looking for.