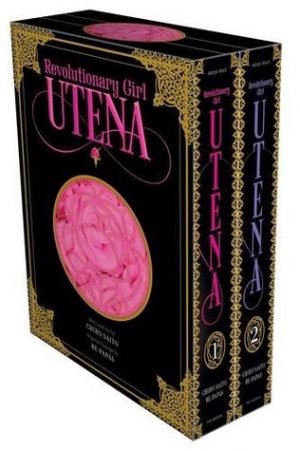 
Sometimes there’s a book I just need. The gorgeous boxed set of Revolutionary Girl Utena was exactly that. I’ll be honest. I’m low-key obsessed with the anime of the same name. I watch it from start to finish a few times a year. Despite this, I never read the manga. Well, now’s my chance! This is the first volume in a two volume boxed set by Be-Papas, the creative collective behind Revolutionary Girl Utena, and Chiho Saito, the mangaka.

And who can resist a beautiful hardcover edition of a manga?

Revolutionary Girl Utena is a very allegorical, surreal series about a girl named Utena Tenjou. Long ago, when she was a child, Utena was saved by a prince. The event had a profound effect on her, leading Utena to strive to be noble and strong, just as he was. Clues lead her to Ohtori Academy, a school who’s crest bears uncanny resemblance to the seal ring the prince gifted her as a child. But when she gets there Utena learns it’s not all fun and games.

‘Okay, so what is the actual plot?’ I can hear you asking. And, you’re right. My summary is more background information than a good overview of the volume’s events, but including more would be spoiler-y at best and impossible to explain at worst. No real summary can do this series justice, partially because some sections are quite allegorical while others are downright surreal.

Now, some of you might be familiar with this franchise. Revolutionary Girl Utena is a manga, an anime, a movie, and a play, if I’m remembering correctly. Unlike many other franchises, these different mediums are not carbon copies of one another, the creators instead using each medium to its advantage and having the story evolve slightly differently each time while retaining the same core themes and ideas.

Utena is a very likeable main character. She’s strives to be a genuinely good, noble person and makes friends quite easily. She’s athletic and wears a boys uniform much to the dismay of teachers who are quite besides themselves with this foreseen disruption of the dress code. Utena is also a very no-nonsense individual, saying that she is going to wear the boy’s uniform because that’s best for her, and if they want to punish her for it, then so be it.

As much the opening pages made me like Utena, they made me dislike her aunt. She walks in and immediately makes all sorts of nonsensical excuses to Utena’s behavior, saying that she’s really a good person but to forgive for the occasional disturbance because her parents died young.

While this quickly gives us a decent amount of backstory and some insight into both their characters, it didn’t make me warm up to her aunt at all. However, I do understand why the mangaka chose to frame the opening pages this way. The reader isn’t left hanging as to Utena’s past, her home life, or her backstory, which, I must say, is rather refreshing.
Honestly, I really wasn’t a fan of the prologue. While the backstory was divulged quickly and the main character’s traits and personality shone, it was largely unmemorable. None of the characters, save Utena, are in the rest of the series. Dios, a mysterious stranger at the beginning of the book, is also referred to as ‘Mr. Licky-lick’. This is odd, juvenile, doesn’t quite match up with the feel of the rest of the volume, and after the prologue he is never mentioned by that name again.

However, as dull and forgettable as the prologue could be the rest of the volume was exciting. A decent amount of action happens within a relatively short amount of time. Now, I could see some people saying that the manga moves a little too fast. There are not that many volumes, and while this compilation is downright enormous, I read it quicker than I had expected. Part of the reason, though, lies within the style it’s drawn in.

The overall flow of the manga feels pretty fluid. It’s easy to jump from panel to panel and speech bubble to speech bubble. However, I do want to note that there aren’t a lot of backgrounds drawn on most pages. This is something I’ve seen with other shojo manga, so I was not very surprised, but I do feel it’s worth mentioning. When there are backgrounds, they’re detailed and I liked them quite a bit.

As a special boxed set, this manga is quite lovely, and will absolutely appeal to fans of the franchise. There are some gorgeous full color spreads at the beginning of the volume. Fun cartoons of how the manga and anime evolved are sprinkled throughout both volumes as well. And, after the story proper are two side stories. One of these, To Curry Favor, was even adapted as a filler episode in the anime, the other being original to the manga. While they may not evolve the main plot any farther, these two stories are certainly fun.

The translation, for the most part, is good. There were a few places that made me scratch my head, though. For example, Miki, one of the student council members, has his name written out in an Americanized form – Mickey – in some sections. At one point a character points out that his name is Miki but everyone calls him Mickey. Which, for those playing along at home, are pronounced exactly the same way. If the meaning, whether a play on words or something else entirely, didn’t quite make sense in English I would have much rather had the meaning explained in the margin, in endnotes – pretty much anything besides how it was handled.

Is it the be-all, end-all of mistakes? No, of course not. But it was annoying as all hell.

Honestly, this is a manga that probably deserves to be read twice. There’s a lot of symbolism and allegory sprinkled throughout. And, at times, the plot can take a bit to wrap your head around. However, if you watched the anime and found you didn’t like it, try reading the manga. This is much less surreal than its TV counterparts, with the plot explained more fully and coherently.