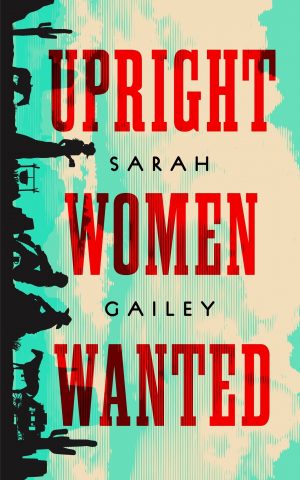 
Sarah Gailey’s novella Upright Women Wanted is another slim volume from an award-winning author packed with adventure and set in an interesting alternative-America setting, much like their first two novellas River of Teeth and Taste of Marrow.

Unlike American Hippo’s bayou setting and hippo-laden heists, this novella is set in an alternative American West, a place covered in sand and cacti and rock formations, the sort of place that would fit in with the mystique of cowboys and an unexplored frontier made popular in spaghetti westerns. Across this difficult landscape travels the Librarian’s book wagon, a wagon that brings reading material that have been pre-approved by a rather harsh, ultra-conservative, fascist government from one town to the next.

Esther is a young woman whose father is set to marry her off in an arraigned marriage. Only, she has no intention of marrying him, and what’s more, her best friend and was executed for possessing propaganda from the resistance. Missing her friend and secret lover, and knowing her father will execute her too if he ever learns her secrets, Esther runs away, intent on joining the Librarians.

What ensues is a slim novella filled with adventure, resistance, fight scenes, and wild west-style shootouts with a cast comprising almost entirely of women and nonbinary folk. This is a welcome reprieve from a landscape that can be almost entirely populated by men, especially on film. Multiple lesbian, as well as other LGBTQ+, couples can be found throughout the story as well.

On the surface, this is a very fun novella filled with adventure and fight scenes, with plenty of danger around every corner and bad guys who can feel downright villainous. However, certain characters simply don’t feel as human as they could be, their actions rather inexplicable.

As edge-of-your-seat, thrill-a-minute as the action sequences are and as heartwarming as long conversations beneath the moonlight feel, certain character’s actions feel questionable. Take, for example, Esther. Despite being someone who truly comes into her own and learns more about herself throughout the story, it feels extremely inhuman that she meets someone directly after her girlfriend’s execution and immediately falls head over heels in love mere hours later. Other characters who travel with the group remain total enigmas, not necessarily getting the page-time necessary to build anything other than a vague idea of who they are in reader’s minds.

On the other hand, the world this story is set in is quite interesting. Just enough is told to paint a terrifying picture of repression, misogyny, fascism, and totalitarian doctrine. This also turns some of the conventions of westerns—even weird west—on its head. The towns, homesteads, and small enclaves so often hailed as safe havens in a world filled with uncertainty are suddenly even more dangerous than the vast wilderness. Other states with more modern technology and firm resistances to Esther’s world’s politics and laws are talked about more often than visited, creating a yearning and hope that fed a very healthy diet, coming to a rather satisfying conclusion for readers.

In the end, the Upright Women Wanted by Sarah Gailey is a fascinating little tale that is stronger in its worldbuilding, setting, and themes than its characterization. However, it is a tale worth visiting, and at under two hundred pages, the novella can be finished in a single sitting with some ease.