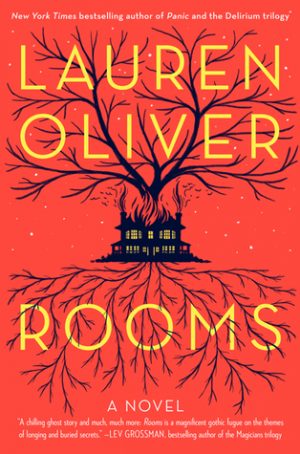 
Gothic horror has seen something of a revival in recent years, with many modern additions to the genre able to stand strong against past generations’ great authors of the genre. Rooms by Lauren Oliver is one such gothic horror. However, it doesn’t always manage to hit its mark, instead being a little too scattered with a few too many ongoing plots that don’t get the focus and attention each deserves. Yet, there is something here that draws in the reader, that makes you want to know more.

This is a story with many of the trappings of traditional gothic horror. There’s a large, twisting house that has been recently inherited, family secrets, mysteries involving the history of the property, and ghosts of the past compete for room against what may be actual, real ghosts. The very wealthy Richard Walker has only recently passed away, leaving behind his fortune, country home, and the ghosts that reside there. Funeral arrangements are left to his estranged family—his ex-wife Caroline, daughter Minna, son Trenton, and granddaughter—who are forced back to the home they all fled for one reason or another.

The stage is set for a very traditional gothic horror. However, the novel doesn’t unfold as expected for a number of reasons. First, is narration choices. The story opens with home’s resident ghosts, Alice and Sandra. This choice was a very welcome change from traditional narration styles, giving insight into the home and inhabitants from a very usual, and very unreliable, point of view.

The majority of Lauren Oliver’s works are YA novels, and the storyline involving teenager Trenton evolves very naturally and comfortably. Trenton is a suicidal teenager trying to make it one day at a time, dealing with both the loss of his father and complicated feelings surrounding a man he didn’t necessarily like. Several plotlines evolve around him, including a strange girl who keeps showing up unexpectedly and ghosts only he seems able to see.

This plot line truly feels like it should have been its own story, one that would have truly sung if it was the sole focus of a novel. As it stands, it largely competes with the more traditional gothic themes and adult characters rather than enhancing the tale.

Adult characters Caroline and Minna follow plot lines that are very much old staples of the genre. These characters are not good people doing things that are self-sabotaging or outright not good things. Secrets abound, and as much is told by silences and closed doors than is said aloud. However, this is rather condensed, pushed aside at times to make room for Trenton’s plotline as well as the two separate plots of the house’s ghosts.

There isn’t enough room for the story to breathe, despite all of the trappings of gothic horror being present. Ultimately, this is the novel’s greatest flaw. There are interesting characters here, whether they are teenagers dealing with the situation as best they can or nasty adults doing nasty things. There are simply too many competing plot threads, too many characters vying for dominance in a story that lacks the page count to give each the space to tell their own story.

Despite its flaws, something about Rooms draws you in the same way all gothic horror seems to. It calls you, beckons you to unravel its mysteries. Unfortunately, it doesn’t quite hold up all the way through.