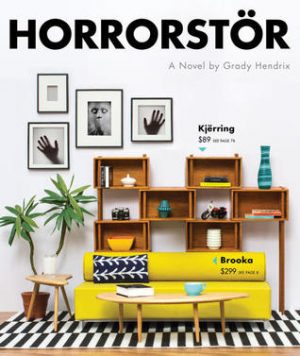 
The more I think about it, the more I like this book. Horrorstör by Grady Hendrix is a traditional haunted house story turned on its head. Familiar themes are explored, changed, and discarded while remaining happily familiar and easily readable.

Horrorstör is about Amy, a retail worker at Orsk, a furniture superstore and Ikea wannabe. She hates her boss, hates the customers, and hates the store layout which is designed for optimal customer spending while leaving things like coherency and common sense by the wayside. Her boss asks her to stay overnight – merchandise is getting damaged and they fear intruders – promising overtime and payment in cash. But what they find in Orsk isn’t anything they expected.

The overall design of this book was pretty inspired. The book isn’t one of the normal paperback book sizes. Instead, it is roughly the size and shape of a chunky store catalog – very square and paperback. Inside are pages from the Orsk catalog both before the start of the story and at each new chapter. Though simple, this really adds to the atmosphere of the story.

The characters, though perhaps a bit of standard fare for this sort of story, are developed in a way which many other horror stories rarely are. There is real character development here. At no point does the author sacrifice character behavior or development for the sake of adding more frightening elements. Amy changes over the course of the story. She grows, she understands herself better, and she understands how her coworkers view her as well. The other characters as well are surprisingly deep.

Something a lot of people will connect with in this book is the retail store horror aspect. I worked retail for some time in college, and there is something very therapeutic about hearing characters talk about all of their horror stories and the crazy layout of the store and odd psychology behind the idea. There is a lot of this, especially at the beginning of the story, and its quite funny.

As for the scary stuff, the book gets scary. Not in a spooky, suspenseful way, but more in the style of a horror movie. It wasn’t quite what I was expecting. Many of the ghost story or haunted house novels I read tend to be more suspenseful than anything else. This book is different, being what I can only describe as horror-movie-esque.

Now, I do want to warn readers about this. While I liked the scary elements, I could see some people being blindsided by it. The middle to the end does get scary. There’s some graphic depictions and there’s some gore. These sections aren’t ever very long and each, I feel, is included for a reason. But they are there, so be warned if that isn’t the sort of thing you want to read about.

You know? I’m actually happy with the ending. It’s no secret that I often find epilogues, especially in horror novels, problematic. I feel that the conclusion to the story is subverted, and not usually in a good way. But Horrorstör is different. The epilogue doesn’t overwrite any of the satisfaction the end of the final chapter. Instead, it does exactly what it’s supposed to do. It enhances the story, gives us a hint of the future, and makes it feel as if the characters have a story, a life, after the final page.

I think the reason why I liked the epilogue so much was that it felt true to the characters. Amy’s reaction to all that happened to her was very refreshingly natural. It was sort of what I expected after such a harrowing experience, and what is so often completely ignored or glossed over in most literature. Amy is not okay after what happened. But all of the character development throughout the novel isn’t ignored. There is the hint of more story, that her life goes though the cover is shut, and I greatly respect that.

In all, I enjoyed this novel. It was a very quick read; I finished the book in just a couple of hours. If you like scary stories or horror movies you should pick up a copy.