#ThrowbackThursday Review – Out of the Silent Planet by C.S. Lewis 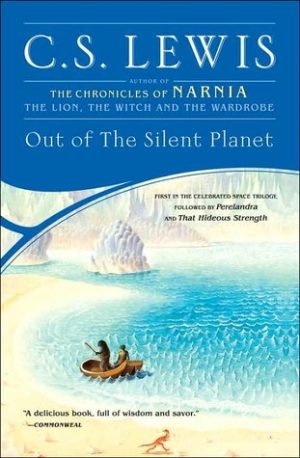 
Nearly everyone has read C.S. Lewis’s iconic series The Chronicles of Narnia. Despite Lewis being a fairly prolific author in his time, I’ve never read anything else by him, living in the delusion that there really wasn’t much more that he’s written, or, perhaps, anything worth reading. Recently, I stumbled upon the first and third books in his science fiction series at a used book sale. Out of the Silent Planet is a short but dense book that is absolutely worth reading.

The main character of Out of the Silent Planet is Dr. Ransom, an academic who begins a walking tour of England and is searching for a place to stay the night when the story opens. Things quickly go downhill for him when he is kidnapped by a mysterious, aging physicist and brought to a planet called Malacandra. But Dr. Ransom isn’t too keen on being a human sacrifice and escapes into the wilds of this unknown world, his chances of ever making it home becoming slimmer and slimmer.

Like Lewis’s more famous series, this, too, is steeped in allegory, not all of which I am convinced I recognized. Despite just finishing this novel, I feel like I should reread it. More than that, I want to. Some of the allegory is hard to miss. But even then, I feel as if it were crafted more finely than some of his children’s series. While I love Narnia, it can feel as if you’re being hit with an allegorical sledgehammer at times when read as an adult. Maybe it was because it was my first time reading the book, but I felt that wasn’t always the case here.

C.S. Lewis is a wonderful writer, his sentences lyrical, his descriptions near perfect. This is denser than the Chronicles of Narnia. Descriptions are more detailed, and there are more of them. The native tongue of the peoples of Malacandra is described and related in parts, but not quite to the sort of extent someone such as Tolkien goes.

While I did love this novel, it is rather dense for being only 158 pages. A lot of a time is spent on Malacandra. And a lot of that time is spent with Dr. Ransom as he explores and gets to know the peoples and ways of this other world. There is forward momentum, but it can be bogged down in descriptions, beautiful and lyrical as they are. It also took me longer to read than many other novels take me, again despite the page count. While this doesn’t detract from the story in any way, it is something to keep in mind if you were looking for a quick read.

Ransom beings as a likeable, but perhaps timid character. While likeable he does have his flaws. However, there is more character growth than I had initially expected. We see Ransom grow throughout the tale. The way he treats the Hross, one of the native peoples of the planet, changes. This is slight, and it takes several chapters, but it is there. Where he referred to the Hross as ‘its’ they become ‘he’s’ and ‘she’s’, real people with real lives and cultures instead of the very 19th century idea of the ‘uncultured savage’. When we were first introduced to these peoples through Ransom’s eyes I was afraid the story would fall into this stereotype. It was something I really didn’t want to happen, partially because I have such fond memories of reading the Chronicles of Narnia. However, this really never happened. If anything, the opposite occurred.

And the world building! Malacandra is a strange and wondrous place, at once so very unlike Earth, but pleasantly reminiscent at times as well. Its history, as much as we hear in this novel, at least, is rather fascinating. We learn a lot about the Hross, but I want to learn more about the two other races which inhabit Malacandra as well. I want more about the beginnings of the world, and the dead but still present surface world, an ever silent reminder of the horrors of the past and the fleetingness of life.

The ending is rather brilliant as well. There is an epilogue, called a Postscript here, which is supposed to be part of a letter to the narrator of the story. The one or two times the narrator breaks the fourth wall begin to come into focus, and this narrator feels more like another character within the tale. There are hints of more to come, though I can’t begin to predict what would happen in the next book.

Despite there being two more books in the series, the ending feels like a real conclusion. Sure, there are hints that there are more, or there could be more, but the ending is very satisfying. I would be completely happy if this were a standalone novel; it doesn’t necessarily need more. I really appreciate books like this. Too often I find books in a series just sort of stop instead of providing any real closure at the end. Also, if you are hesitant about dedicating yourself to reading yet another series, you don’t have to be. This can definitely be read as a standalone novel, and as it is the first in the series no background information or early world building will be missed.

There’s something magical about discovering a ‘new’ book by an old favorite author. Out of the Silent Planet was a little dense, but a truly wonderful read. I’m definitely going to have to find a copy of Perelandra, the second book in this series. If you like C.S. Lewis’s other work, or like stories with a lot of in-depth world building, this is for you. If you don’t like heavily descriptive writing this book may not be the one for you.