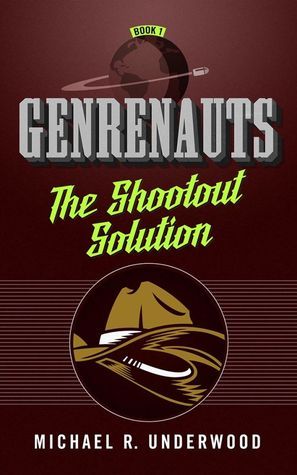 
I hadn’t heard of this series at all before I stumbled upon this book at the library. The Shootout Solution, Episode 1 in the Genrenauts series, by Michael R. Underwood is a fantastic novella that combines science fiction and western genres and is just plain fun.

The Shootout Solution by Michael R. Underwood is a novella, the first in the Genrenauts series. Leah Tang is a standup comedian. She doesn’t have any sort of following, and if the last gig was anything to go by, her career isn’t going as well as she’d hoped. After her last gig, a man approaches her with a proposition – a job with the Genrenauts Foundation. Based at a nearby university, this organization oversees parallel worlds, each of which follows the laws and tropes of a literary genre found on earth. Each parallel world follows a literary genre. There’s a sci-fi world, a rom-com world, and so on. Leah and the senior members of her new team get transported to a Western World in a tense situation which already sent one Genrenaut team member to the hospital.

This novella was quick, fun, and perfect for readers of almost any genre. The familiar science fiction theme of parallel worlds is used in quite a unique way here. Let me try to explain the concept a little better. Each world is based on a different genre. Within those worlds certain continents follow the rules of a certain sub-genre. For example, there’s a dark fantasy continent within the fantasy world. The world we see is based off of Westerns. When something goes wrong – usually when the rules of the genre aren’t being follows and chaos erupts – issues arise in comparable earth locations, something which Leah’s new team tries to prevent.

The more I think about this novella, the cleverer I find it. Parallel worlds are quite different here than anywhere else I’ve seen. What we think of as fiction and fictional genres are their reality. While the premise that if something goes wrong, not according to genre, consequences are played out on our world isn’t new, per se, it is handled very differently. I love that if events in these worlds stray from the normal genre stereotypes, things go catastrophically wrong. It pokes fun at itself, at the genres explored, but with love.

The first episode in the series feels like a fun introduction to the world. There are hints of a bigger picture, of a much larger threat facing the Earth, but we don’t learn much about it. This will, I’m sure, be a more central theme in later episodes, and I do want to find out where this series is headed. What can I say? I’m hooked.

The characters were fun. I liked Leah, our main character. I liked that she was a stand-up comic. It added an element of believably to Leah handling herself so well in such a foreign environment. Side characters were likeable, and the cast a very diverse one. I appreciated this a lot in the novel. I did feel like I didn’t get to know many of the characters as well as I would have liked, but again, this is probably something which will be explored a bit more thoroughly in the following episodes within the series.

Though I would have liked more time with the characters, I have to admit that a novella format is probably the best format choice for this series. A novel filled with shorter adventures within other worlds has the potential to feel very disjointed, even with an overarching plot. I got exactly what I was looking for out of this novella, and was completely satisfied with the ending.

I can’t help but agree the quote on the front of the novel by Marie Brennan, author of A Natural History of Dragons series, which calls this book “Catnip for geeks”. That is exactly what this novella is. It’s extraordinarily readable and tons of fun. I will most definitely be reading the rest of this series soon. If you like literary themes in books and stories involving parallel worlds, read this book. If you don’t like trope-ish books, even in jest, this is probably not the book (or series) for you.