Review -Seven to Eternity, Vol. 1: The God of Whispers by Rick Remender 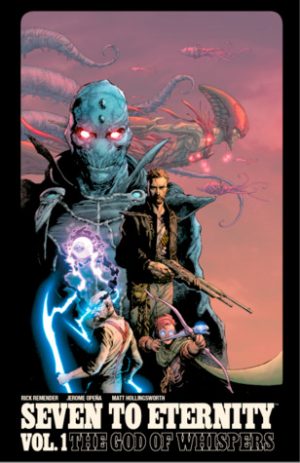 
I picked up a couple of graphic novels while at Book Con earlier this month. While I’m a huge fan of manga, american graphic novels aren’t something I read or own a lot of.  One of these was Seven to Eternity, Vol 1: The God of Whispers. This, unlike Saga, was one I’d not heard of prior to picking it up. The art caught my eye as I was flipping through, the creator’s names were vaguely familiar, and it seemed like it was set in some sort of fantasy world. So I purchased the first volume, brought it home, and finally got around to picking it up.

This graphic novel is about Adam Osidis, one of the last people not under the influence of The God of Whispers, a figure who now rules over everything. The Osidis clan is disgraced now, but they are also one of the few people who are still their own masters. Nearly everyone else has surrendered their freedom, listening to the whispers that never stop. Because the God of Whispers can offer you deals. He can make the things you fear go away, but at a costly price.

I am quite torn over this graphic novel. There are many things to love about it. The art is quite stunning. Everything is colorful, with plentiful shading. Character design is otherworldly. Grotesque characters and backgrounds appear. A lot can be said about the world building through art design. At no point does this world feel ‘normal’. This is a world very unlike our own with all manner of fantastic creatures. Yet, while being a strange, otherworldly place I would love to explore, there is a feeling of wrongness about it, most notably near the God of Whispers seat of power. The setting changes visibly. Everything feels a bit off, a bit unsettling, and this truly adds to the atmosphere as the story progresses.

The characters are interesting as well. Adam Osidis is a middle aged knight from a disgraced house, and is slowly dying. But there’s a promise to his father he needs to keep, and plans of his own that need to come to fruition. As the story progresses we meet many other characters, perhaps a few too many all at once. Not all, but many of these characters begin to be fleshed out by the end of the volume. We learn their backgrounds, desires, and motivations.

However, a lot of characters are introduced all at once. A couple of them I got confused for one another. I think this would have been much easier to follow in either a television adaptation or in a straight up novel format. Either way, the character’s themselves were rather interesting and I found it easier to keep who was who straight much easier after the scene they were all introduced in was over and the story had moved on.

While I had no gripes with the pacing of this graphic novel, I can see some people having problems with this. The pace went from zero to one hundred and back multiple times. There was little real build up most of these times. Characters went from quiet conversation, relating their backgrounds or some world building to the reader, to suddenly being in battle before going back to conversing once again. There were also several flashbacks. These flashbacks did their job very well; they conveyed integral information to the plot quickly and were exciting all on their own. But, if this is something you aren’t a fan of, do be warned.

The battles all looked very cool. Everything was flashy, with knights fighting and people wielding magical powers. These sections were fun, and I found myself enjoying them even when I initially mixed up some of the characters names and allegiances.

I know this is a first volume, but I do wish that some things were better explained. In particular, I wanted more information on the God of Whispers. While the concept behind him is fascinating, I felt like it wasn’t actually explained at all. I don’t understand how his powers work. This is not some small detail, either. The God of Whispers has completely taken over the world with this power, and seemingly with relative ease at that, leaving nearly all citizens of all nations under his sway. This is, in effect, the entire plot. The other characters in the story are supposed to understand this ability, how it works, and how to avoid becoming trapped within it. At no point is this conveyed to the reader clearly enough.

It’s unfortunate, but I have felt the same way about some of Rick Remender’s other work. In particular, the video game Dead Space, which he worked on. I always find his concepts fascinating. I’m drawn into the worlds he builds. But often I find myself wishing for more.

I think I will continue with this series. Perhaps not right away, but I will. I’m too curious as to where the story is going not to continue. If you like fantasy graphic novels or Rick Remender’s other work, you’ll probably want to pick this one up. If you don’t like stories that do not fully explain their magic systems this one may not be for you.