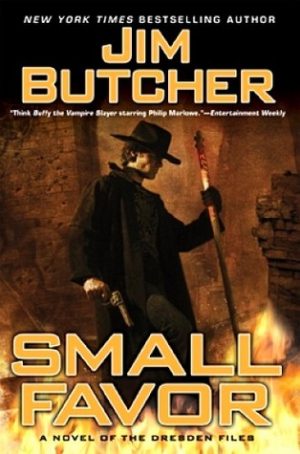 
It seems that Jim Butcher felt we were long overdue for some time with with the fairies as we see Queen Mab come back into Harry’s life and demand one of her favors from Harry. It also appears that we were overdue for some involvement from Gentleman John Marcone as the plot of this book is brought on by his capture.

Understanding why my reviews for the Dresden Files books are often short and vague is because I’m trying so desperately to not spoil major plot points in the book for anyone reading the review. All the things that make this book series excellent are in the writing and handling of major plot twists, character development and surprises. So, essentially, all spoilers! So, without further ado, more vague praise about this book in the series.

So, if you’re anything like me you’re torn on how you fell about John Marcone. He’s no choir boy and he’s down right sleazy sometimes in his, shall we say, business transactions so when Mab shows up and demands that one of her favors from Harry be that he protect Marcone you can say that I agreed with Harry in the frustration of being put in this position. Aside from being compelled by the favor he owes Mab he also is formally petitioned by Marcone’s associate, Ms. Gard, to have the White Council, which Harry is a part of, file an objection as per the violation of abduction of an Unseelie Accords signee.

We see cameos by Ivy the Archive, Luccio, Kincaid, Thomas, Michael Carpenter and various members of the fairy courts. Plenty of surprise attacks, political maneuvering and chaos later and we see Harry still stuck with no clear good decision. Instead, as most often happens with Harry, he is forced to make the best decision possible and live with the consequences of said decision.

Side note, if you’re like me you are also a fan of Ivy. Let’s just say the Denarians are truly terrible to her in this book and, without giving spoilers, you see the depths of Harry’s affection for this girl as well as Kincaid’s. We get a slight insight into Kincaid as a result of this incident and honestly it made me like Kincaid a little more.

In an effort to avoid any major spoilers (which honestly is nearly impossible with these books) be prepared to see some major changes for Michael Carpenter and the Knights of the Cross.

And, as with most of my reviews of books by Jim Butcher about Harry Dresden here is one of my favorite quotes from the book.

“I’ve had a tense couple of days. And I’ve got to tell you, burning someone’s face off sounds like a great way to relax.”

Again, sorry for the vague review but honestly, the spoilers in this book are so juicy I would hate myself for posting them here for the world to see. Go read this book!