Review – The Tourist by Robert Dickinson 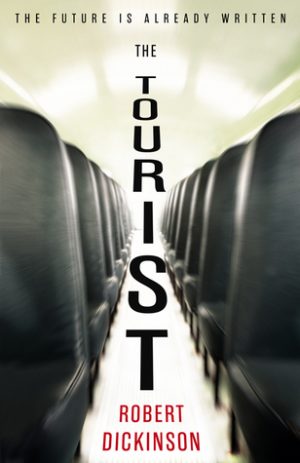 
I’d seen The Tourist by Robert Dickinson at the library several times before I picked it up. I was intrigued. The cover looked generic, the synopsis sounded like a typical thriller novel, and the spine was marked as science fiction. I was equal parts confused and intrigued. I stumbled across this on Goodreads more recently and on my last trip to the library I finally picked it up.

In this novel, time travel is not only possible, but its rather commonplace. It’s main use? Tourism, along with historical and scientific research. On one particular excursion to a local mall, a time traveling tourist goes missing. Spens, the main characters, must find her. After all, there are no records from the future stating that she stays missing. The missing tourist, however, seems to be doing everything she can to stay missing as society around them begins to fall apart.

There are a lot of things that I really like about this novel. I really enjoyed the time travel aspect. I’ve always liked the discussion on how exactly time travel works. How do relationships with family and friends change when time travel is involved? Do things like death matter in a future with time travel in the same way they do now when family can merely go back in time and visit the deceases? If you have the possibility of looking at your own future, would you? Can past, or future, events be changed, even if they’re already recorded? Should they be changed?

This novel tackles all of those questions, providing commentary throughout the novel via the character’s actions. Some seem to have hard answers. Others, maybe not so much, leaving it up to the reader to make their own conclusions. It’s a fascinating study of the genre.

In addition to this, I found the futuristic society portrayed quite fascinating. Dickinson did quite a bit I loved and don’t often see. The future doesn’t have only one language, and people are not at all homogeneous. The way different cities and societies view one another is completely fascinating. The future world seems to be teetering on the edge of a knife. Those from one city view another as despotic, an almost dystopian society. Relations between different places are poor, and the people suffer for it.

The majority of the novel takes place in our world around current times. The people of the 21st century are well aware of the 25th century sightseers that live and work in their midst. Both modern and future humans think of the other as strange, odd. Both sides view the other as all having a strange sameness, neither side really being able to tell one person from another in the same way those of the same century do. Neither side really understands the other. Those of the future are understandably careful with information released about themselves and the future Earth. Those of the past are an enigma due to a severe lack of information existing from the surrounding time period due to a time period of widespread extinction and global disaster. I feel that these things aren’t portrayed in quite the same way in any other book. I liked seeing these people of different times interact. The flaws and misconceptions each had for the other were very human and understandable, even if I didn’t agree with the character’s opinions.

The Tourist by Robert Dickinson was a fun time travel story with some very interesting discussions and an almost dystopian future world. The story being told had be gripped from beginning to end. If you like time travel narratives or books with alternating point of view, pick this one up.