#ThrowbackThursday Review – Slayers: The Ghost of Sairaag by Hajime Kanzaka 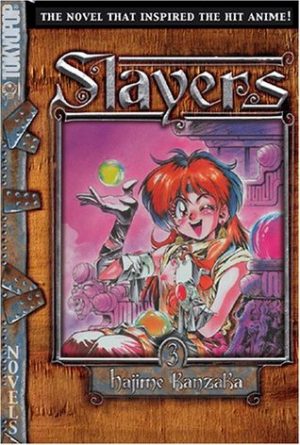 
I really wish these books were still being translated. The series is a lot of fun, and the books don’t disappoint. This is actually the second time I’ve read The Ghost of Sairaag by Hajime Kanzaka in only a few months. I’d originally started it less than a week before moving, so of course the book got packed away in a box I couldn’t find upon move in, the last chapter still unread. At this point I figured I may as well read the whole thing over again, something I’m never against when it’s one of my favorite series.

In the third installment in the Slayers series, Lina Inverse and her partner in crime Gourry Gabriev are being hunted, not by Mazoku but by heroes and bands of knights. Someone has put a price on their heads, but for what reason, they aren’t sure. With Rezzo the Red Priest, or at least someone claiming to be him, appears, things go from bad to worse.

The Ghost of Sairaag, like the two novels before it, is written in first person point of view from Lina’s perspective. And, also like the previous two light novels, this one also consistently shatters the fourth wall. Lina is telling the story to us, the reader. The more I read the novels, the more attached I grow to Lina, and I believe this is the reason why. It is very easy to want to root for her despite obvious personality flaws or any annoying habits she may have.

Speaking of personality flaws, Gourry still serves as the means for explanations and short infodumps. These sections aren’t quite as numerous as in other books. Once or twice this is even turned on its head, with Lina, for once, being the one who doesn’t recognize Lantz upon first sight and bungling up attempts at dodging the hordes of people after them. This was quite a welcomed change from how these scenes normally play out.

The pacing of this volume felt faster than the last. Time spent traveling, while abundant enough, is largely glossed over, something I wish more authors took to heart a little more often. The characters face a truly absurd amount of foes – nearly every bounty hunter, knight, and do-gooder is out to capture them due to the wanted posters plastered across every town. However, the vast majority of these battle are mentioned in passing only. The author doesn’t waste the readers time focusing on the smaller details. Lina (and the reader) are more focused on the other tidbit of information that lets slip – Rezo the Red Priest has taken up residence in Sairaag.

This, of course, should be impossible due to the events of book one. So, of course, Sairaag is the very first place Lina heads.

There is something about this novel I truly appreciate. Unlike other series, the characters are very conscious of their actions, particularly their magic and how and when they use it. The vast majority of novels, light novels, manga, and comics I’ve read completely disregard this. Widespread destruction follows the characters wherever they go. The collateral damage is enormous, but never really discussed. Or, more confusingly, magic spells and other events which would logically have a great and lasting impact on the area around the characters has no seeming impact at all.

This is not the case in the Slayers universe. Lina in particular is very aware of how her sorcery will impact those around her. She stays away from spells that may injure her comrades. Despite her personality, she tries to stay away from obviously dangerous situations magically speaking – casting fire spells in forests is always a no-no for example. This novel brings this aspect to the front a little bit more, showing the reader what can happen when careless magic users use spells in situations and places they shouldn’t be. It’s very refreshing to see this in a series.

I have always loved the Slayers series. This volume is no exception. It was fast, fun, and you can bet I will read the next one. If you are a fan of the show or are looking for some fast paced high fantasy you should check out this series. If you don’t like stories told in first person or dislike when characters speak directly to the reader this may be a series to forego.