Review – your name. by Matoko Shinkai 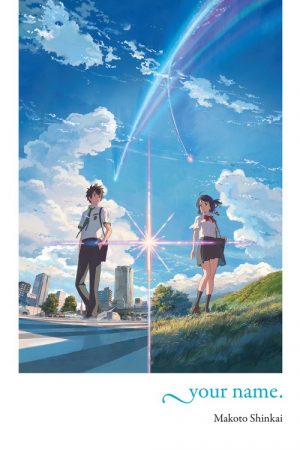 
I almost always read the book before I watch the movie. In this case it happened purely on accident. I wound up picking up a copy of your name. by Makoto Shinkai from Barnes and Noble during a buy two get one free sale.

I knew absolutely nothing about this story when I picked up the book besides the movie is very popular and as an anime fan I probably should have made more of an effort to watch it. I think not knowing anything beyond what book’s synopsis says worked to the novel’s advantage. I began the story in the same place as the main characters, Mitsuha and Taki, not knowing exactly why they were switching bodies, how it worked, or anything about their personal lives. When revelations occurred I was just as shocked as they were. Despite not being much like either main character, I related more closely to them than many other characters I’ve recently read about.

This book is written in absolutely stunningly and translated beautifully. The narrative switches between the two main character’s points of view. The transitions from one character’s voice to the other was, quite often, done perfectly. When one character goes to sleep, the other awakens, sometimes in their own body, sometimes not. There are no constant chapter changes, the character whose voice is currently being used tagged at the top. The readers are expected to keep pace with the author.

This is something I greatly appreciated. Many books, even those that don’t need to make the distinction so blatantly, often have the character’s name perched beneath the chapter number. I’ve never quite understood it. More often than not I feel that if a distinction outside of the main body of text is needed, the text needs to be reworked. But maybe that’s the editor in me talking.

Certain sections have their voices meld together. One character says a line. Then the other character says the next. The type face is slightly different in these sections, adding to the ease of separating one from the other. But separating one character from the other is often not the goal of these sections. These sections always end in both characters, separated by time and space and never having formally met in person as themselves, coming to the same conclusion, feeling and acting the same way despite everything.

These moments held a special kind of beauty, something I find hard to describe. Literarily, I was impressed with how these revelations were handled. The reader can learn quite a lot from these sections. The longing in their voices. The pure amount of emotion was near overwhelming, touching upon something most novels never do, something nameless that spans age and time.

Now, yes, this is a story about two teenagers switching bodies. At face value it sounds like any number of mediocre anime series I tend to put on in the background and never watch very thoroughly. I wonder if the cover text was written that way purposefully as a marketing strategy of some kind. The fact of the matter is that the story is so much more than that. Your Name isn’t something that falls into the genre stereotypes. And, when it does dabble in some situation humor, it doesn’t stay there for long.

The way in which the two characters grow closer is wonderfully original. Two people who lead such different lives, learn more about one another not by speaking to each other, but by living in the other’s shoes. They learn about their families, their friends, their co-workers. They respect one another first and foremost.

Body swapping isn’t the only thing which pushes this novel towards the fantasy genre. Despite everyone besides myself probably knowing the story from start to finish when they pick up this book, I don’t want to give anything away. There is a bit of playing with time in this book. The Shinto temple Mitsuha’s family cares for also becomes more prominent than I first guessed.

I really grew to love the characters in your name. This isn’t true only for our main characters, but the side characters as well. The wisdom from Mitsuha’s grandmother, and how deeply it effects the other characters. Mitsuha and Taki’s friends and siblings, and how much they mean to both characters. I also liked the dual perspective on the same characters – how Taki views certain people verses Mitsuha and what that says about each of them.

This is a novel that pulls at your heartstrings. You’ll feel things, whether you want to or not. I think I wound up tearing up a full three times, most of those times near the end. It isn’t a sad story, necessarily, it’s just an emotional one.

Your name. is an amazing tale, one that will be remembered for a long time to come. Read this book. It will not disappoint you. If you like fantasy set in the modern world, stories involving time travel, or the movie you will definitely want to pick up this book.