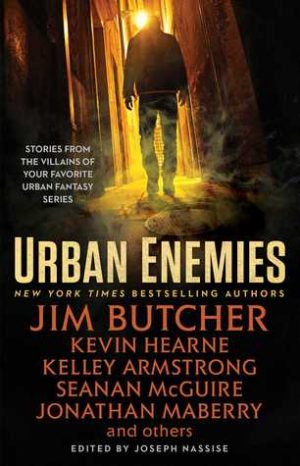 
Villains are intriguing characters. I’ve always liked a well fleshed out villain, one that’s a little more than evil cackling and petting cats. Urban Enemies, edited by Joseph Nassise and released August 1, 2017, is a book that definitely scratches that itch.

As wonderful as the premise is, this anthology can feel a little inaccessible in some ways. There are stories from many familiar names. This doesn’t necessarily mean I’ve read their works, of course. Even out of the authors I do read, I found I hadn’t always read the particular series whose villains were being featured. This distance which is potentially created between the story and the reader is addressed, however.

Before each short story is a small blurb, just a short paragraph introducing the world, the characters, or outlining the sort of magics used. This is incredibly helpful when you haven’t read anything else set in that universe. However, it can also be problematic that these are needed. While fans of these authors get fun additions to their favorite series it does somewhat ostracize those who are unfamiliar with them.

On the other hand, if you read a good number of the authors featured in this anthology, this will be a perfect book for you.

Now, one thing which I had a slight issue with was the headlining story “Even Hand” by Jim Butcher. The story itself is fine. I’ve always loved Marcone’s characters and always welcome a new story featuring him. The problem is that we’ve seen this before. “Even Hand” is a reprint, the story originally featured in a different anthology several years ago. I was looking forward to a new story within the Dresden Files world. Alas, there was none to be had.

I can’t help but feel that this is a bit misleading. With Butcher’s name featured so prominently on the cover I expected something new. As far as I am aware this is the only reprint within the anthology, which only serves to bother me more. I might have forgiven it if this was merely a collection of older works, or even if it was a mash up of old and new tales. Instead, it left me a little disappointed.

But don’t get me wrong. I still enjoyed this anthology. There were some good stories mixed in there, even if I was unfamiliar with the worlds they were set in. I did skim a few; not everything held my attention. But I do want to read more of the works of Jeff Somers whose story “Nigsu Ga Tesgu”, set in the Ustari Cycle, was included within the anthology. And anything by Seanan McGuire is always welcomed.

In the end, I have to give Urban Enemies a solid three stars. I think that this anthology would be best for those extremely familiar with the included authors and their works. This might sound a little obvious, but I really do feel like there was a certain distance that I couldn’t cross with some of these stories, not fully appreciating characters or their stories. If you are a fan of evil characters or urban fantasy, this is probably something you want to check out. If you don’t like reading about evil characters or you are unfamiliar with the majority of the authors this might be a book you want to skip.