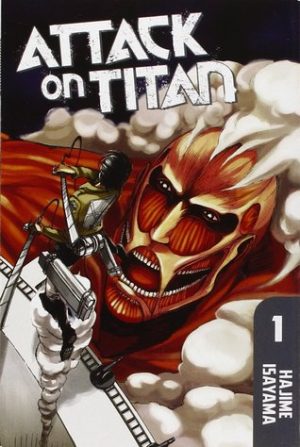 In case you’ve never read the manga or watched the anime, here’s a quick synopsis.

Attack on Titan is a story set in a post-apocalyptic type world where all of human civilization exists in one city protected by three massive, circular walls. Outside of these walls are titans – massive humanoid beings that attack indiscriminately and have a penchant for devouring people. The story follows Eren Jager, his sister, Mikasa, and their friend Armin on the day the outermost wall fails, changing their lives forever.

Now, I’m going to be honest here. While I do like the series overall, I have some mixed feelings about this first volume.

First, let’s talk about the artwork.

This is Isayama’s first work. And, in some places, it feels like a first work. Some panels, mostly those featuring characters at a distance, have some trouble with perspective. Characters arms and legs are too short for their bodies, or else too long. This doesn’t occur in every similarly framed panel, but it occurred in enough of them to be noticeable.

There are plenty of other scenes which are drawn just fine, some better than fine. The illusion of movement is portrayed wonderfully. The managaka uses panel boarders in several places instead of one long panel running across the page. This creates the illusion of people and horses moving across the page in real time, something I liked a lot. More often long lines are used to depict quick movement over long distances, the background seemingly rushing towards the viewer. This also worked quite well, creating the feeling of titans and other characters rushing across the landscape.

The story itself is both engrossing and intriguing. This is classic tale of overcoming enormous odds. There are seemingly unbeatable monsters. The 3D gear is very cool and pretty original, making for some great fight scenes and normally impossible maneuvers. This first volume sets the scene quite well, giving the reader enough details to understand the world while still leaving enough out to make them learn more. What are titans, really? Why did they start attacking? These are all questions which aren’t answered, and ones which prompted me to continue reading.

The story itself only falls short in one aspect. The second half of the volume takes place years later after Eren and the others have joined the military. On the eve of their graduation there is another titan attack. I felt like the section leading up to this was a bit rushed. This second attack by the monsters we know are capable of widespread destruction didn’t have as much emotional pull as the attack which opens the manga, nor the corresponding scenes in the anime. By having such a large time jump coupled with such a short amount of time with many of the secondary characters introduced in the second half of the manga there I didn’t feel any great emotional attachment to anyone besides the three characters originally introduced.

Would I continue with the series? Well, there is plenty to keep my interest plot wise. The world is interesting, the monsters are scary. The cliffhanger alone is enough to keep me reading for at least one more volume. And I have read more volumes in the series. However, there are some issues with perspective along with some pacing issues. If I’m honest, I would have to recommend the anime over the manga, at least for the events of Volume 1, since the issues I’ve listed were addressed. If you’re a fan of the anime and want to see what the manga’s all about you should pick up a copy. If you don’t like horror this may be a manga to skip.