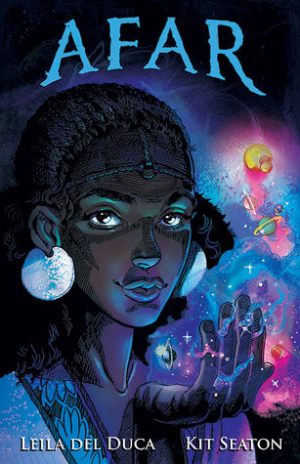 
I’ve been on a quest this year to read more graphic novels. I was initially attracted to Afar by Leila del Duca by the cover art, then equally intrigued by the synopsis. When I had the opportunity to receive a copy from the publisher, I jumped on it.

Afar is about two siblings Boetema and her younger brother Inotu. Their parents have recently left the city looking for work, leaving the two siblings at home with some cash to see them through until they can send more. But Boetema has bigger problems. Every night when she goes to sleep she finds herself trapped in someone else’s body. Inotu, who has a knack for getting into trouble, overhears more than he should and finds himself with enemies he really doesn’t want. The two siblings are forced to work together to solve their problems.

Anyway, on to the rest.

The art was, from what I could tell, quite nice. I can’t necessarily speak to it to a great degree, or at least don’t feel comfortable doing so, and for one important reason. I downloaded this to my kindle, a colorless version. Probably because I’m just that used to reading black and white manga. Therefore, I was missing elements of this art wise.

I have conflicting feelings on this graphic novel. On the one hand, the concept is interesting, the characters are interesting, and I quite like the fantasy setting. On the other hand, I’m not sure the concept really paid off, the world wasn’t as fleshed out as it could have been, and the ending was abrupt and unsatisfactory.

The story is set in a nonwestern society. The world itself seems to be set somewhere between a fantasy far past and a science fictional futuristic world, but one where most of the tech was lost or forgotten for some reason. This hints at an interesting past, a world that has a lot of potential. However, this was never really explored in depth. There simply wasn’t any time to, but it is something I would love to see in future installments.

On that note, I’m not positive there are going to be any future installments. I haven’t heard anything about a volume two despite the story being set up rather well for another volume. This graphic novel ends with Inotu writing in his diary and saying that he’ll start again tomorrow in a new notebook since that one is full. I thought this was a very cute and clever way to end volume one and go on to volume two. The only problem is that it looks like there is no volume two, or else there won’t be for quite some time.

If this is a standalone graphic novel there are some issues that can’t be ignored. The plot about Boetema’s parents going off to find work is left hanging. The children have moved on out of necessity, their parents are far away trying to eek out a living and set up a better life for them. Nothing here is resolved. The plotline about the man who, at the start of the novel, threatens Inotu is left off equally unsatisfactory.

I felt much the same way about Boetema’s abilities. The concept is interesting. When she sleeps, Beotema finds herself in someone else’s body, living their life. The first few times this occurred, I quite liked it. The sections were shorter, featuring all manner of interesting peoples, creatures, and places. However, I began to enjoy these sections less as the story went on. I wasn’t very invested in the ongoing plot line involving the one young woman whose consciousness Boetema continually inhabits. I’m not sure why, but every time one of those sections occurred I found myself wishing that we’d just go back to the plot. Maybe it was because the two parts felt so disconnected. No matter what happened, I just felt that the occurrences in her dreams had no real effect on the majority of the plot line.

What I did like was the way in which the two siblings were portrayed. Their relationship was both wonderful and believable. Despite loving one another, both keep their secrets. These secrets have clear effects on one another. Unlike some other stories I’m not going to mention, they both actually talk about these and clear the air between them. I really liked this. I liked how they relied on one another and clearly cared for each other.

Despite having an interesting concept and some elements I greatly enjoyed, I had to give Afar only three stars. Too many plot lines were left unfinished. Too many questions were never answered. This is quite a shame, because I still think that the potential is there. If a sequel or second volume comes along my rating may change. But, as this seems to be only a single volume graphic novel, I simply can’t overlook these issues. If you like stories set in non-European societies or realistic examples of sibling relationships then you should pick up a copy of this graphic novel.