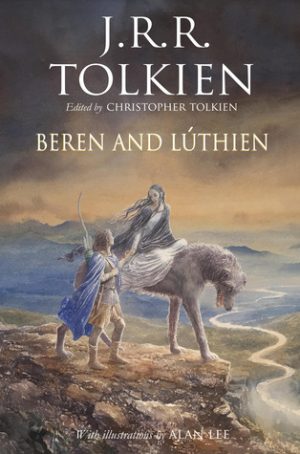 
Every time I see that a new Tolkien book is being published I get unbelievably excited. I can’t help it. Tolkien’s works were one of the first adult fantasy series I’d ever read, and has remained a life-long love. Beren and Luthien by J.R.R. Tolkien and edited by Christopher Tolkien is the last in a long line of posthumously published works focusing on Middle Earth. This one tells the story of Beren and Luthien, one of the tales found within the Silmarillion.

I expected this book to be something more comparable to The Children of Hurin than another compilation. I respect Christopher Tolkien’s zeal in trying to be as completely true to what his father wrote or would have wanted as possible. In this particular case I can’t help but feel that this dogmatic approach hurt rather than helped this volume. More than that, I think it’s safe to say that a longer, book length version of Beren and Luthien is what people want, and something that this story deserves.

This tale itself is a very good one. In my opinion, the version found in the Silmarillion stands as one of the best written pieces J.R.R. Tolkien produced. The story touches on themes that we see very little of, especially in the time period which this was first written. This is a story about a princess who can save herself and can save the man she loves. Luthien is an incredibly competent character and the first character I thought of when the term ‘strong female character’ came up in conversation. Even today this is something that isn’t always found in books.

Despite having some background on the events leading up to and characters surrounding the tale of Beren and Luthien, I still felt there was a certain degree of inaccessibility between the story and the reader. It is best if the basics of the story are already known to the reader. If you’ve read the story found in the Silmarillion or, at the very least, if you remember the version mentioned more briefly in the Lord of the Rings. (I think Aragorn may have been discussing it with Frodo in the swamp during Fellowship of the Ring? Please correct me if I’m mis-remembering.) Honestly, it’s probably best for the reader if they’ve read the Silmarillion as a whole, or least wiki-ed certain parts.

There are several versions of the story in this book. Some of them have the main character’s names – Beren and Luthien – listed differently. Certain characters are added. Some are missing. We have some very interesting villains not seen in the version within The Silmarillion. In particular I liked Tevildo the cat, a good foil to Huan. It was also interesting seeing the evolution of the story throughout the years. I really liked that the Lay of Lethian (what was completed, at least) is included, something which is mentioned in other books but which I, at least, have never seen.

Despite my gripes, the tale itself is really quite wonderful. I’ve always loved the story of Beren and Luthien, and it’s safe to say that I always will. I only wish that this volume was handled a little differently. The illustrations by Alan Lee are all very beautiful, as always.

However, I do still think that someone new to Middle Earth will feel very lost first going into Beren and Luthien. Still, there’s a lot to love here. Fans of the series get to see the evolution of one of the best tales of Middle Earth, and I think those hard core fans are who will appreciate the book the most. If you are a diehard fan who owns everything with Tolkien’s name on it you will definitely want this book for your collection. If you don’t like editorial dialogue interrupting the narrative or if you aren’t a fan this book may be one to pass up.