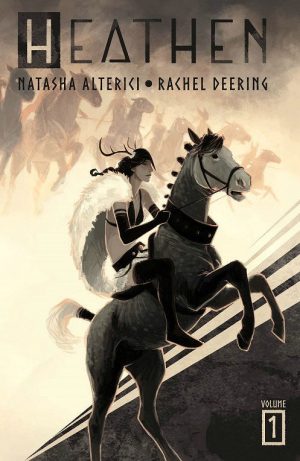 
When I first saw the cover and read the description I knew I had to read this graphic novel. Heathen by Natasha Alterici is a fantasy tale set in Eastern Europe involving the Nordic gods and a female Viking warrior banished from her homeland for kissing another woman.

Okay. I know this is the part where I go into the plot a little bit. But, first thing’s first. Please allow me to gush about the art.

Dear god. This art! I’ve never seen any art quite so alive as this. It’s not just beautiful, it’s nearly magic. The art is so very alive, not static in the slightest. Everything bears a painted feel, brush strokes visible, colors blending beautifully into one another. The art shines throughout the entirety of the novel, but nothing can compare to the scenes with moving images. You can nearly feel the character’s moving, feel the wind rush past when they’re on horseback. Battles feel brutal, dark, and full of chaos. But nothing, nothing, can compare to the way flames dance across the page, their heat almost palpable, their beauty only matched by their danger.

Here, the art is alive. It’s as if its moving on the page, even when you know its not possible. I was utterly drawn in by the art style. It was as if I was there, watching the story unfold before me. I’ve never seen art done quite like this before. At least, not with such magnificence or such skill, and you can bet your first born that I will be seeking out more of the creator’s work.

The story itself only adds to this graphic novels quality.

Heathen is about Aydis, a woman who was exiled from her village. After being seen kissing another woman her father was given an ultimatum – marry her off to an eligible bachelor or sentence her to death. Aydis was sentenced to death, a ploy by her father to aid her in escaping, despite knowing she would be doomed to never return. Angry and alone, Aydis decides to chase a legend told to her in her youth, a story about the goddess Brynhild, the former queen of the Valkyrie. Cursed by Odin, she was locked by a ring of fire atop an impenetrable mountain waiting for a warrior to release her from her prison.

Aydis decides to prove that the warrior doesn’t have to be a man. It can be her.

Seriously, if you’re looking for a strong female character, Aydis is it. She sets a goal for herself and is determined to see it through. Despite adversity, despite any possible anxiety about her choices, she still remains firm in her decision – she will break Brynhild’s curse, she will make it to Odin, there is nothing wrong with her and who she chooses to love, and she will prove that she is just as great a warrior as anyone else from her village. Honestly, Aydis is one of the best female protagonists I’ve read about this year.

Now, let me admit something here. As much as I was loving the beginning, I was afraid that the graphic novel was going to fall into the age old insta-love trope. I figured the plot was going towards the standard ‘save the goddess in distress and live happily ever after’ plot. However, that is not the case; the story proves to be much deeper than the old tropes.

Brynhild has a very interesting past which comes to light as the story unfolds. Instead of instant-love, we see two strangers come to understand each other and form a bond of friendship. As Aydis learns more about Brynhild, she decides she wants to help her and get this curse lifted once and for all.

Many other characters are introduced, but not so many as to feel overwhelming. We meet other immortals, gods and goddesses, each of whom are quite interesting in their own rights.

One character I liked in particular was Freyja, the goddess of love and knew leader of the Valkyrie. While not interfering quite as directly as she possibly could have, she does cast her lot into the mix. Important commentary and a different perspective is given to Aydis. I wound up loving this character when I usually find portrayals of immortal deities of love to be a bit two-dimensional. She is fleshed out rather nicely, though, providing information and encouragement that Aydis needs when she needs it. She acts more as the goddess of love than the queen of the Valkyries. This disconnect between her as a person (or goddess, I should say) and the duty imposed on her by Odin only make her a more fascinating character, one full of contradictions.

Another interesting aspect of the story is the time period in which it is set. This is not the ancient world. The land is changing. Foreigners have brought Christianity to the land. The gods, while respected, perhaps, don’t seem to have the same effect that they once did. That isn’t to say that their power or abilities are lessened, but there is a definite disconnect between what the gods say and feel and what the humans do. The opening is a good example of this – Aydis is cast out for being queer, but goddess of love ensures her that there isn’t anything wrong about how or who she loves at all.

I really, really want to read the next installment in this series. Right now, preferably. Hopefully we’ll see more volumes published, because I need to know how this tale ends. Heathen is beautiful both visually and narratively. It is an epic quest of traditional kind while featuring very un-traditional protagonists. This is a graphic novel that everyone should read. If you like breathtaking artwork, strong female characters, and LGBTQIA+ representation read this immediately. If you don’t like stories involving gods and goddesses this might not be your cup of tea.