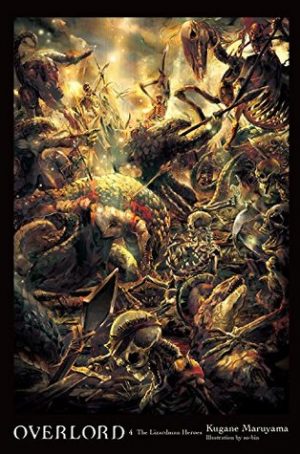 
Moving is hard. We’ve all done it and we’ve all hated it. It’s stressful, it takes up all of your free time, and all of your books get stuck in boxes. Including the brand new, released-two-days-before-moving-day copy of one of your favorite fantasy light novels. But the boxes are finally empty and Overlord, Vol 4 has been read! Overlord, Vol 4: The Lizardmen Heroes by Kugane Maruyama is a high fantasy adventure following characters who, in another story, would probably be bad guys.

If you’ve watched the anime and, like my husband, don’t like reading about the events you’ve already seen, start the light novel series here. This is the first whole novel with events not seen in the anime. In this volume we see Nazarik go up against the Lizardmen, a society of lizard-people that live in a nearby swamp. Nazarik is low on support, general supplies, and test subjects and some not-quite humanoids will fit the bill just fine.

This installment in the Overlord series is different than previous titles in several waves. The most obvious is, perhaps, our main character. The story opens with Ainz returning from the events of book three to check in with the inhabitants of Nazarik, dole out new orders, and leave again. His role as an adventurer gathering information and making a name for himself never ends, and he is trusting Cocytus and the other denizens of Nazarik to fulfill his plans.

Ainz is missing from large portions of the book, off doing other probably interesting but not as narratively important things. While I did miss seeing events from his point of view for the majority of the book, I did find myself greatly enjoying seeing events through the eyes of the floor guardians and others. They are characters often seen, sometimes through their own eyes, but very often in down time. Think of the short intermission sections. These sometimes convey important points, if only personality wise, but they are most often short, concise, and humorous.

We also see a lot more of the day to day workings of Nazarik. Previous volumes mentioned the trials and tribulations of finding themselves in a different book, but this is the first volume where those repercussions were so blatant. Nazarik is short on certain supplies, the materials being unattainable one way or another in their current world. Corners are being cut, alternative methods and materials explored, and, though the lizardmen have done nothing to Nazarik, it is easy to understand why Ainz needs them.

Several new characters are introduced within this book, namely the lizardmen heroes spoken of in the title. When not following the perspective of Cocytus or other Nazarik inhabitants we follow Zaryusu and several other lizardmen who are preparing for an attack by unknown foes. The lizardmen had their own culture, their own history, and their own personalities. For only being introduced in this book and not having every chapter follow their point of view exclusively they were extremely fleshed out.

I really enjoyed the lizardmen and their culture, or sometimes lack of culture. I liked that, while they could speak, they weren’t very human-like or had a human-like culture at all.

It is easy to see the lizardmen as the heroes of the tale despite all the time we’ve spent with Ainz and his subjects. They are heroes, explorers, leaders, and are under threat of attack. Nazarick is filled with vampires, demons, and all manner of creatures and people normally found under the ‘bad guy’ umbrella, and their intentions aren’t always pure or for the greater good. They are in it for them.

Yet, as the story unfolds and we learn more of the lizardmen’s culture and history it becomes apparent that these creatures aren’t necessarily the wholesome obvious ‘good guys’ that we, or at least I, at first saw them as. This is a civilization that’s seen recent war. Recent civil war at that. While they don’t want to be wiped out or subjugated by unknown enemies, the lizardmen don’t necessarily mind another war either. These aren’t just cute lizardpeople trying vainly to defeat an enemy that the reader knows they probably don’t stand much of a chance against. These are creatures that are complicated and don’t fall into the black and white good and evil scheme seen in so many books. There’s a little bit of gray in there, and that makes them only feel all the more real.

When Ainz does come back into the story we see an aspect of him not really seen since the first volume. The stress of running Nazarick, of being a good leader, of doing the correct thing in regards to leading his people, is beginning to get to Ainz. His normally suppressed human tendencies and feelings are much more readily seen here. The immense pressure of running a small kingdom is getting to him.

I can’t help but feel that this book sets up for future events in some ways. There are still questions as to how human, for lack of a better term, the inhabitants of Nazarick really are. Where does their original NPC programming end? It’s a complicated issue, and one which, perhaps, we’ll see more of eventually.

I definitely enjoyed this book. There was a lot of character development as far as Nazarik citizens were concerned. The internal struggle of Ainz was brought more to the forefront than it has been in several books. And the newly introduced characters were interesting and quite likable.

However, having Ainz left out of much of the novel made the book a bit difficult to get into at first. In some ways it was like starting out from square one. This is, no doubt, simply because we are following a brand new character and are introduced to a completely new place and society. If this proves problematic for you, stick with it. The book is definitely an installment worth reading. The pacing, while a bit on the slow side in the beginning, ramps up quite a bit as the book moves along, ending in a series of exciting battles. So stick with it, take your time if you need breaks between learning about a handful of new characters and a new civilization.

Definitely pick up Overlord, Vol. 4: The Lizardmen Heroes by Kugane Maruyama. This is an excellent installment in one of my favorite ongoing series. It shows events in multiple viewpoints, some of which aren’t often explored. I am very much looking forward to the next book in the series, which should be released in September (as far as I remember). If you like high fantasy, or are a fan of the anime, absolutely read this book. If you don’t like multiple points of view this may be a book to skip.