Review – The Massacre of Mankind by Stephen Baxter 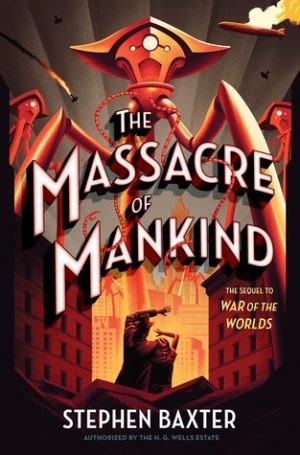 The Massacre of Mankind
By: Stephen Baxter
Release Date: August 22, 2017
Publisher: Crown Publishing Group
Series: The War of the Worlds #2
Received From: Publisher
(All reviews are our own, honest opinions.)
Rating:


Tuesday, August 22, saw the release of The Massacre of Mankind by Stephen Baxter. This is a sequel to H.G. Wells The War of the Worlds. The premise is rather straightforward. The orbits of Mars and Earth are drawing them closer to one another, closer than usual, at least. The Martians attack the Earth once more, plunging us into war once more.

First, it is apparent that Baxter did his research. Any reading of interviews or the author notes at the end of the text make that very clear. This does come through, at least in certain sections, in the writing. Certain things are mentioned for a specific reason. However, I don’t think many readers will fully appreciate some of them, at least not before reading Baxter’s own words at the conclusion of the text. For example, a weapon made by Edison is mentioned, which is a nod to a very early sequel to The War of the Worlds by a different author. While a touching tribute in its own right, just how many people would understand this at first glance is most likely a rather small number. Tributes and diligence to sticking to the original, while very admirable, does seem to get in the way of the storytelling. (I feel much the same about certain works of Tolkien which have been compiled and edited by Christopher Tolkien.)

The pacing in this book, overall, is very slow. The beginning of the narrative crawls along at a snails pace, inching its way towards something that resembles plot. The majority of the first one hundred pages or so is filled with characters from the first book getting back together in order to receive overseas phone calls from Walter, the narrator of the original tale. Of course, nothing quite happens in any of these phone calls besides the obvious – Martians are probably coming.

Here, I believe, is the first major issue with the story. While very true to the original in world building and voice, the narrative lacks a true plot. The aliens are coming only carries the story so far. The War of the Worlds did have the narrators searching for his wife and wanting to get back to her as the main characters motivation (even if, as this book points out, he wound up traveling towards the Martians more often than traveling from them). This book does not have anything of the sort to help propel it forward.

Not having any meaningful reasoning behind characters actions, or the group of original characters getting back together in the first place causes the first half of the novel to feel dull and tedious. Combining this with the fact that no sort of action is seen at all until roughly two hundred pages into the text make this book much more of a chore to read than I ever expected.

For those playing along at home, is almost the length of the entirety of The War of the Worlds.

Simply put, there’s just too many words and not enough action. While the writing style does resemble the time period in which the original novel was written, it doesn’t feel like the tight prose of Wells. Instead, we have the long, rambling passages and descriptions of the scenery more normally found in the works of an author like Dickens.

The language is beautiful, to be sure. There are beautiful lines and lots of description. We learn a lot about the characters’ lives after the first book. There are some haunting passages about what the Martians are doing to the inhabitants of Venus and what their ultimate goal of conquering the Earth is, and what that would bring about. There are sections I truly enjoyed in this book. But, for the most part, the delivery inhibited the story. Very little of real impact happens on screen.

What do I mean by this?

Well, events like to be explained in great detail. The main character, or whomever we are currently following when the point of view switches, does not always experience things first hand. A great deal is simply explained to the main characters when they arrive at their destination. This takes away a lot impact. I don’t want to hear about the inhabitants of Venus living on the Earth and what happens to them, I want to see it. I don’t want to hear other characters theories about what happens to people the Martians capture and how they manipulate the humans in their capture, I want to see it in all its (probably gory) detail.

The impact on very meaningful scenes is sometimes lost amongst the admittedly beautiful prose. This is doubled by one crucial factor – all of the changing of point of view. The book starts out from a first person narrative, quite the same as the War of the Worlds was written. However, first person point of view shifts to the third person point of view, following separate characters introduced in Wells’s original work as they have their own encounters with the Martians.

At first I was happy the point of view had switched. I found Julie to be a rather unlikable main character. She lacked any and all empathy and, despite staying in London to report on what occurred, did quite literally nothing besides talk to people and read the newspaper.

However, I do not understand the decision to write in the third person with Julie relaying events of other characters after hearing their side of things after the war. Particularly confusing is the third person viewpoint of Harry’s actions, Julie’s ex-husband. He was stated as having kept a journal of his own chronicling his own adventures, which do become rather interesting. Of course, none of these are chronicled by Harry, but only through Julie’s secondhand telling or, more infuriatingly, described by people Julie speak to.

There is simply too much distance between the action and the reader. It is hard to care for the characters as I first wanted to. Even during exciting sequences there is a very real distance between the characters, the action, and the reader. That chasm is never fully crossed, even in very meaningful, deep scenes. Characters are described as not making it through the war, but their deaths never shown in the actual text, rendering moments with potential meaning and deep character growth quite meaningless.

Another infuriating habit was the characters to reminisce about what happened during ‘the first war’, referring to the events of War of the Worlds. Once or twice is fine. There will undoubtedly be readers who either didn’t read Wells’ book or else read it so long ago that certain plot points have become muddled. Some reminiscing is understandable. A paragraph here or there relaying very important information is to be expected. But the sheer amount of it was daunting and largely unnecessary. At that point it would have been faster to merely read the first book than all of the descriptions of it in the sequel.

Also found in this book is quite a bit of alternate history. World War I was lost, not won, by the UK. Britain is now occupied by Germany. And, while I love a good alternate history and agree that Martians coming to take over the Earth would probably have a major impact on society, thereby changing ways of thinking and certain major events, this alternate world building had very little impact on any actual plot.

What did have impact was the very real ways which the first Martian landing had on the main characters of this book. Events had very real impact on personalities, familial ties, and relationships with spouses. Actually having this addressed was quite a welcome relief from the ‘happily ever after for everyone’ trope that proliferates across science fiction and fantasy. Still, it would have been nice for at least one character to not have their marriage torn apart, their family not liking or speaking with regularity, or have deep mental scarring. I just wanted someone, anyone to be happy.

The Massacre of Mankind by Stephen Baxter did have some good points. There were sections that I liked. However, this novel did have more flaws than not. While quite excited to begin this novel, I was left rather disappointed. A very hard-core fan of Wells who read all of his books and essays may find some very interesting nods to the author and his work within this novel. However, its rambling nature and lack of action will most likely be turn off for many readers. Unfortunately, I would up giving this novel a much lower rating than expected upon reading the opening pages.