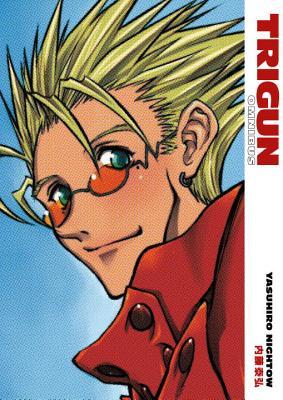 
One of the first anime I ever watched was Trigun. Soon after I bought a few volumes of Trigun Maximum, which have been sitting on my shelf for close to ten years. Of course, Trigun Maximum is not the start of the series, something I hadn’t realized at the time. Finally, finally, I’ve read the actual beginning of the series: Trigun Omnibus by Yasuhiro Nightow. It took long enough, I know. And I am very happy I finally got around to reading this.

Trigun is a science fiction, wild-west styled manga that takes place on the faraway planet of Gunsmoke. Vash the Stampede is a wanted man. With sixty billion double-dollars hanging over his head, every gunslinger on the planet is hunting him. Vash, is an avowed pacifist, however, not wanting to fight, but not willing to go down without one either. Because when he does fight, the damage is catastrophic. Not massive collateral damage and hundreds dead catastrophic. More like hole punched through the planet, millions dead catastrophic.

This is a fast paced action story with roots in science fiction and gunslinger westerns. Vash is a likable character, one surrounded by mystery and seeming contradictions. He is a pacifist, but carries a bounty in the tens of billions. He doesn’t wish to fight anyone, but is quite skilled in fighting nonetheless.

The story takes the reader on a whirlwind tour of a struggling planet. Society survives in run down cities with vast swaths of desert in between. Technology seems to be the only thing keeping humanity going, but this very saving grace also seems to be something which, at least in part, has been lost to time. Vash’s backstory along with overall world building are relayed in part, both unfolding slowly as the story progresses. What is shown is intriguing. The blanks aren’t all filled in yet, leaving room for growth as Trigun Maximum, the next part of the saga, unfolds.

Character designs are, at times, over the top, in the most visually interesting of ways. Villains appear less human and more grotesque. They are larger than life, or else smaller than normal. The art overall, was quite enjoyable. Some panels were a bit hard to discern, however. Certain fights got a hair confusing between character movement, physical fighting, and gun fighting. It was difficult to figure out what exactly was going on at certain points – who was fighting who, how they were fighting, and who was winning.

In this respect, I’m glad I watched the anime. If I hadn’t, I expect that I would have been much more confused in certain scenes than I was. Some background, quieter moments between characters, and chances for more overt character development were lacking, the story jumping quickly from one action-packed adventure to another. I do wish that the manga took a bit more time to delve into some of that. Without watching the anime I wouldn’t have understood the inclusion of Meryl and Millie, nor would I have found myself caring about either one very deeply. Perhaps they were never meant to be quite as large a tour de force as they were in the anime, but they show a unique perspective on the situation and I would have enjoyed a little more time spent with them.

The manga did hit a few major issues. The main one being not everything was translated. Sure, chat bubbles were translated. So were inner thoughts and explanations on character and setting. However, all onomatopoeia’s and sound effects, those giant Bams! and Kabooms! we are so used to, were left in Japanese. I understand leaving the individual panels as is. Changing these to English would not only be a massive undertaking, but would change the original art as well. But a translation should exist nonetheless. The vast majority of other manga I have read have the translation between the borders of one panel and the next using an asterisk followed by the word in English. I’m unsure why this same approach wasn’t used for the Trigun Omnibus. Educated guesses can be made in many cases, but I can’t help but feel as if I missed out a bit by not being able to read everything on the page.

Needless to say, if you have watched the anime adaptation of Trigun, events do differ. This is particularly prevalent at the end of the omnibus as this story is wrapping up and Trigun Maximum begins. If you are mainly a watcher of anime and tend to pick up a series at the point the anime leaves off, this is probably one series you don’t want to do this with. While volume one of the omnibus is much the same as the anime, events do differ in volume two.

Trigun by Yasuhiro Nightow is a fun story of action and adventure with a likable main character. While this manga felt a bit ‘monster of the week’ the story does lead towards a much larger overarching plot toward the end. Questions were left unanswered, but with promise of being answered in the future. I already own the first two omnibuses of Trigun Maximum and will certainly be reading them soon.