Review – The Castoffs Vol. 1: Mage Against the Machine by MK Reed and Brian Smith 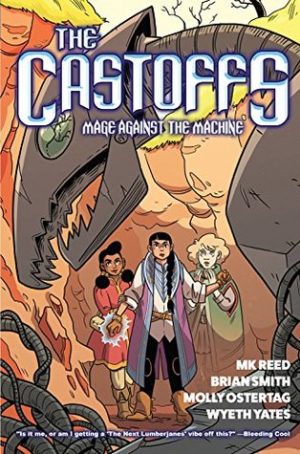 The Castoffs Vol 1: Mage Against the Machine
By: MK Reed; Brian Smith
Release Date: April 12, 2017
Publisher: Lion Forge Comics
Series: The Castoffs #1
Received From: Publisher
(All reviews are our own, honest opinions.)
Rating:


I received a copy of The Castoffs Vol. 1: Mage Against the Machine by MK Reed and Brian Smith from the publisher quite unexpectedly. This is a fun, engaging graphic novel with great characters who grow immensely throughout the story.

The graphic novel opens during a battle. Mages with varying magical powers are locked in battle with large robot-like things. And there seems to be no winner in this battle. The rest of the story takes place twenty years later. Characters have grown older, the main character of chapter one now teaching young mages. Not too far away strange things start happening, the townspeople start experiencing memory loss, losing hours at a time. Three students are sent to the city, but what they find isn’t exactly what they expected.

This is a fun graphic novel with lots of energy and spirit, the sort of story that you just enjoy. While not genre defining, it was tons of fun with a great cast of characters I came to love.

The first chapter is, in essence, a flashback. Characters introduced are, by and large, not included in the rest of the volume. Those which are included are older now, no longer fighting but teaching the younger generation. Despite this disconnect with the characters of the first chapter and the characters of the rest of the work, I think this method worked in the graphic novel’s favor. A great deal of world building is dealt with quickly and efficiently. The pacing doesn’t slow later within the volume, instead allowing the story to take its natural course. By the time we are introduced to the ‘true’ main characters, we have a firm grasp of the world, some of its politic, and the sort of magic being used.

The majority of the story follows three students of magic who are sent on a mission to a village not so far away from their place of learning on a mission. Strange happening have been going on in this town, the local doctor reporting multiple people coming to him complaining of memory loss. Whole hours are vanishing at a time, something which is rather abnormal and almost certainly magical in nature. Three students, none of them friends, are tasked with visiting this town to learn more and provide assistance.

The main characters were all rather likable. Charris, Trihn, and Ursa are some of the better teenage characters I’ve read about recently. Each one felt their age. They were not too whiny or felt younger than their years. Nor were they much more mature than their circumstances and age would dictate. As the trio sets out on their journey, contention arises. Secrets are kept and rivalries are born. Despite seeming as standard fare and pretty par for the course, this contention is quite believable, fitting the character’s abilities, personalities and motivations very well. Human fears and the history we see earlier in the volume plays into this, as does the tenseness of the situation the girls find themselves in. All of the various complications between the characters are wrapped up, if not neatly then understandably. Each character grows throughout the text, learning from their flaws.

The art is bright and colorful. Battle scenes are exciting, with movement drawing the eye across the page. Quieter scenes tend to have less background. In particular, dialogue scenes which occur while traveling to or from the main character’s destination have very sparsely detailed backgrounds to having no background at all except a large swath of color, forcing the reader to focus solely on the character’s exchange.

The magical abilities of the girls are quite varied, some of which aren’t as readily seen in protagonists or main characters as others. Powers very often seen in antagonists or else who’s faults are oft warned against in genre literature are show in a grayer light. The pros and cons are both visible, and create an interesting dialogue.

This graphic novel was a fun story of magic and technology. With a great starting off point, there is plenty of potential further volumes. This is a series I am definitely looking forward to continuing with.