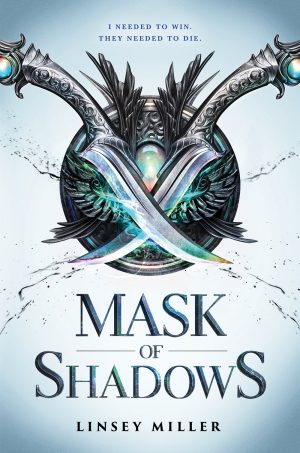 
When I first saw the description for Mask of Shadows by Linsey Miller, I was immediately intrigued. The book was compared to the works of Leigh Bardugo (whom I love) and Sarah J. Maas (whose work I bafflingly have never read). It features a gender fluid main character, a thief bent on revenge who is auditioning to become one of the queen’s assassins, a group known as the Left Hand. The character sounded very interesting, hints of an interesting backstory, and plenty intrigue and action. Needless to say, I was sold!

Before we get into the thick of things, a bit about the plot. The main character is Sallot Leon, an orphan from a country which no longer exists due to a massacre via magical creatures during a war more than ten years prior. When auditions are held for one of the queen’s assassins, a prestigious position to be sure, Sal immediately decides to join. It’s the perfect place to get close to the court and put Sal’s plot for revenge into action. Pitted against dozens of others, it’s a tense battle of skill and wits to see who will rise and who will fall. The majority of the book focuses on the trials of becoming Opal, the assumed name of the assassin whose position is being filled. Sal, along with many others vying to become a part of the Left Hand, goes through several major tests, many different classes, and assassination attempts at the hands of their fellow auditions throughout the novel.

I can see the appeal of following Sal from one class to another and of completing test after endless test to become Opal. It is fulfilling to see a character succeed in their journey and to visibly grow before our eyes. I admit there were times I enjoyed reading these sections. However, it was difficult to take many of them at face value. Sal never felt very believable as a character.

The book begins with Sal as a thief. While some skills do cross over into the realm of good assassin’s work (quiet, light-footed, can blend into the shadows) there are plenty of skills that Sal has never learned. These are readily admitted to. Death may be something Sal has encountered, perhaps is even used to, but it is not something they have done on any sort of basis. Sal isn’t a fighter. Weaponry wasn’t something they were ever taught. And yet, despite any hiccups, Sal nearly always excels in tests and classes.

For an easy to understand example with more close to home applications, Sal begins the story illiterate. This is something the court aims to rectify and reading lessons quickly ensue. In just a couple of lessons – and I mean that in the literal sense of the word as there were only two or three lessons at the outside – Sal can read nearly anything. This is quite a jump at a rather unbelievable rate. The same is true of other classes. Weapons are learned quickly. Other contestants who are more obviously skilled are beaten in tests. These instances pulled me completely out of the story, suspension of disbelief broken.

The competitors in the competition are all referred to by number. True identities are kept hidden behind masks and aliases. Each competitor is given a number which they are addressed by throughout the competition. In conversation Sal is most often referred to as Twenty-Three. Numbers aren’t memorable, nor are we ever given much of physical description of characters. They are hidden behind masks and other disguises, after all. This means there are no real identifiers for any characters – names and physical descriptions simply don’t exist. This makes it difficult to feel particularly attached to characters, or to keep certain individual competitors straight towards the beginning of the novel when their numbers were so great.

The novel’s world building was something I found very intriguing. This is something that can be quite easily overlooked as the majority of pertinent information seems to be related in a few info-dump-y sections that are mostly toward the latter half of the novel. The world the story is set in is something the reader rarely sees due to the vast majority of the story taking place within the palace grounds. Despite seeing a microcosm of the world we are presented with a good deal of information on politics, the current world, and the vast, violent changes it has undergone within Sal’s lifetime. This is a world of tentative peace. A dark, bloody war is was is only just behind them, magic sealed off permanently, and relations extremely tenuous between nobles within the court.

However, I do want to state that readers may feel that these sections of world-building are info-dump-y. Coming from the realm of long winded high fantasy novels this is not a terrible issue for me. In fact, I actually quite liked these sections. Until this point I wasn’t very invested in the characters or the plot. The action ramps up towards the end of the novel, however. Socio-political issues are brought forth as the competition for the next Opal draws to a close and Sal finds themself in the thick of things. The ending of the book is quite the cliffhanger.

The ending of this novel sets up for a much wider stage with fewer characters. Loose plot threads must still be accounted for, and new plots were set up within the closing chapters. I’m curious as to what will happen next, and I will most likely be reading the sequel at some point. Despite mixed feelings on certain parts of the book, Mask of Shadows bears that almost addictive quality so many young adult novels seem to have. If this novel sounds like something you’d enjoy, definitely pick up a copy for yourself.