Review – The Everything Box by Richard Kadrey 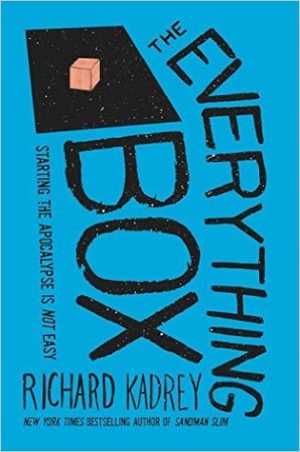 
Yet another title I have had my eye on since its release has finally been read. The Everything Box by Richard Kadrey is a fun, fast paced book with a host of likable, quirky characters.

The book opens several thousand years ago with an angel atop a mountain who is ready to fulfill his duty and begin the apocalypse. The problem? His pockets are empty, and the doomsday device is inexplicably missing. In the modern era Coop, master thief of magical items, is hired to steal a small black box for a client. But Coop isn’t the only person after this box. He soon finds himself with the Department of Peculiar Science, a government organization dedicated to the supernatural and unexplained, who claims that this device isn’t only an old family heirloom. This device could set off the end of the world.

The story is written in third person with an omniscient viewpoint. Despite this, there is never any doubt as to who the main character or what the focus of the story is. Viewpoint changes normally occur at the beginning of a new chapter. Transitions from one chapter to the next flow well. The jump in perspective or current plot threads are never jarring as I sometimes find a many charactered story sometimes can prove.

There isn’t a terrible amount of world building within the book, but there doesn’t need to be. This is a book that takes place within the real world, after all. While I don’t believe a specific date was ever mentioned in text, the story takes place in a real world location and with all of the technological and cultural aspects needed to make the date current. There are, of course, angels who have misplaced the device which will begin the apocalypse, as well as a plethora of paranormal creatures – ghosts, poltergeist, vampires, and many of the usual fare.

This book is in many ways a humorous book, and it is a book whose humor works. The jokes don’t fall flat. Points are made by the sheer absurdity of the situation. At the same time this very absurdity helps to make characters more relatable who may have otherwise fallen flat or been wholly unrelatable. Take, for example, Phil, a poltergeist who, despite already being dead, has a fear of dying which causes him to be overly cautious and, some would say, cowardly. Quasphiel, the angel whose tale opens the story, may be an all power being, but he is one who, among his own kind, is no more than glorified middle management and always seems to somehow muddle things up.

Though filled with heists and master thieves, this is not a book which glorifies either. There are more thefts gone wrong than the perfected, Hollywood styled heists one might expect. Coop is a thief, and one who is quite competent at what he does. Even so, he finds very real obstacles in the form of the friends and acquaintances he works with as well as his own personal shortcomings. These are characters who don’t always like their coworkers, don’t always get along with their friends.

Tense situations and a plot that deals with a doomsday device are often handled with levity. The humanness of these characters – whether they be human, ghostly, or angelic – sometimes reigns in what could be seen as an outlandish plot. Coop doesn’t necessarily want a doomsday device. His wants are simple – a paycheck, not being killed by one of the ever multiplying factions vying for this object, and to not go back to jail.

The plethora of characters are both fun and fascinating. Each character has their own motivations for collecting this box, whether it is for the paycheck, to make their parents happy, or to fulfill the wishes of their god and begin a doomsday of their own. Scenes focusing on the two separate cults are reminiscent in some ways of Terry Prachett’s Guards! Guards! Both cults are filled with very regular, everyday people who have no idea what they are getting themselves into, raise money for bake sales, and despite attempting to trigger their religions version of the end of days do not believe in magic or the supernatural.

Even the most lovable and quirky of characters change over the course of the novel. The working friendship stuck up between Coop and one of the agents from the Department of Peculiar Science was well constructed. We see two characters of very different backgrounds thrust together in this tense situation. Despite it all, they find common ground and learn over the course of many chapters to work together. And they do work very well together. This relationship never strayed into the territory I thought it would go in either. The friendship never stuck me as more than that, remaining the sort of platonic friendship and relationship between co-workers that can be somewhat hard to find in literature. The urge to pair characters off at the end of the novel is largely avoided here, for which I am grateful. Instead, the book focuses on delivering a great ending with plenty of twists.

The Everything Box by Richard Kadrey was a terrifically fun tale that I definitely recommend reading. I look forward to continuing with this series, and, in fact, already have the second book, The Wrong Dead Guy, on my digital to be read pile.