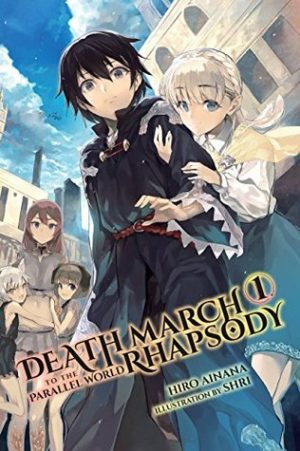 
I have read a lot of stuck in another world type fantasy. High fantasy, light novels, manga, stuck in a video game, or fallen through a wardrobe – I read them all. Death March to the Parallel World Rhapsody by Hiro Ainana is one of my all-time favorites within the genre. While bearing a different sort of humor and extremely different main characters, Death March is just as excellent a deconstruction of the genre the light novel Konosuba. It is a light novel I highly recommend, and an anime I highly anticipate within the coming year.

The main character, Ichirou Suzuki or Satou as he is known in-game, is a programmer white labeling for a video game company. After a grueling release with last minute issues Satou falls asleep beneath his desk, too exhausted to bother going home and with the release of a second title looming on the horizon. Then Satou finds himself in another world entirely – a dream, he insists, because the alternative is simply too farfetched to fathom. With enemies approaching, he uses the easy-mode special abilities he added to the game only a few hours earlier … and quickly jumps up roughly three hundred levels in skill. (See? A dream, obviously.) Instead of setting out on an adventure or diving headfirst into trouble, Satou decided to use this dream (he’s not stuck in another world) as vacation, spending much of his time sightseeing and steering clear of anything that looks like trouble. Unfortunately, trouble finds Satou anyway and he must decide how to best use his over-powered status to fight his way to freedom, defeat unknown and extremely powerful enemies, and protect those in his care.

Death March to the Parallel World Rhapsody is a deconstruction of the genre, and very good one at that. As such, the book would be best appreciated by those who read (or watch) stories involving characters stuck in another world, particularly stuck in video game like worlds – a genre known as isekai in Japanese. As far as deconstructions go, this is probably one of the best I have read, poking and prodding at genre tropes that are not always poked and prodded as well as video game mechanics as a whole.

One of the things I appreciated the most about the story was the main character. While Sato does appear as a teenager within this other world, he is nearly thirty in the real world. This mentality is something that is carried over into the other world, thereby utterly destroying tropes often found not only in isekai but in light novels, manga, and anime at large. Despite winding up gathering a cast of female teenagers, they are a ragtag bunch ranging from young children to nearly twenty years old, from slaves to military personnel. Embarrassing gaffs occur between the male protagonist and the mostly female lead secondary cast, but only to show the ridiculousness of the situation.

It’s very refreshing to read about a main character who not only is supposed to be my own age, but also acts like it. I can’t remember ever reading something within the genre where the first time the male protagonist shows some kind of interesting in a woman it is an overweight thirty something mother of one. Not in this genre, at least. When he lands atop an armor clad woman while trying to save her life it is only with pain and the vague notion that television has it all wrong – it isn’t funny or embarrassing. It hurts, because armor is hard. Torn clothing in battle leads to the Satou rummaging in his bags for replacement items instead of gawking at the indecency.

It is not just light novel and manga tropes that this novel pokes fun at either. Video games as well are poked and prodded at relentlessly, most notably very early within the book. From Satou’s utter frustration with his incompetent manager to the publishing company that is so afraid of alienating potential new customers with the games difficulty that they are in real danger of alienating and angering their actual fan base, video games are called out very early on. This doesn’t end when Satou emerges in this other world, either. The special abilities meant for brand new, first time players are so over powered that they physically change the landscape around Satou, turning him into someone with the powers of a god and the bank account of a rich lord. It also made the standard video game passive (and active) skills look just as utterly ridiculous as they would be were they found in the real world. Increased speed makes Satou run at forty miles an hour should he want to. Increased strength and dexterity means he can climb up sheer cliff faces if he so chooses.

This book, while paced well for the story being told, is not a very fast paced book overall. A good sized section of the book takes place in the middle of town with the characters shopping and showing Satou, this strange but generally likable newcomer, about their city. This is a slower, more in depth look at video game world turned real, at the real world consequences video game mechanics would have, and a main character who treats being trapped in another world like a hard earned vacation.

What it’s really doing is setting up the story, carefully crafting character’s personalities, backgrounds, and statuses. Satou is a main character both objectively wiser in the ways of the world that the standard teenage protagonist and perhaps more jaded. The whole hearted do-goodness of many main characters isn’t to be found here. Satou goes to great lengths to actively keep himself out of certain situations – he doesn’t want trouble and he doesn’t want to become an active player in regional politics or other troubles. Talk about dragons, wyverns, and demon lords is all well and good, but Satou makes no move to do anything about these besides be a passive observer and save a woman tumbling out of the sky. However, hard lines of what he will ignore (and perhaps is used to ignoring on a daily commute in a big city) and what he cannot are drawn in the sand. The mistreatment of a young child who, it turns out, is a slave is something he simply cannot endure and is willing to break his sightseeing only rules for.

While the story begins rather aimlessly, it certainly doesn’t stay there. Satou may find himself a sightseer in another world, but he is inevitably dragged into the events, religion, and politics of the region to varying degrees. Like other isekai novels, Satou wonders if maybe other people from the real world, from Japan, have found themselves transported to this place like him. Unlike other series I am currently reading (Overlord is the first that comes to mind) this plot thread does have payoff within the first book. The effects of our world on this other world are visible, though not overt and it is not difficult to see the main plot heavily involving this aspect in the future.

Satou is a character I really like, but I do feel that certain people would find him a bit boring. This is not a person who jumps into situations without thinking, nor is he especially passionate about a lot of issues within this world. How could he be passionate when he knows nothing about this world? While realistic, he is not one for the impassioned fervor of a teenager. Instead, the book has a clear direction, Satou not wanting to step in without due cause. This is something I both respect and like about the book and Satou as a character. However, I can see certain readers getting frustrated by this apparent lack of action, no matter how grounded in real world sensibilities it might be.

Death March to the Parallel World Rhapsody by Hiro Ainana is most definitely a series I will be following. The second volume is already in hand, and I look forward to delving into it soon. The third volume is also available, having released at the end of September. If you are a fan of isekai or portal fantasy I definitely suggest picking up a copy of this book. Likewise, if you are a seasonal anime watcher you may want to read this volume before the anime version is released in January of 2018!